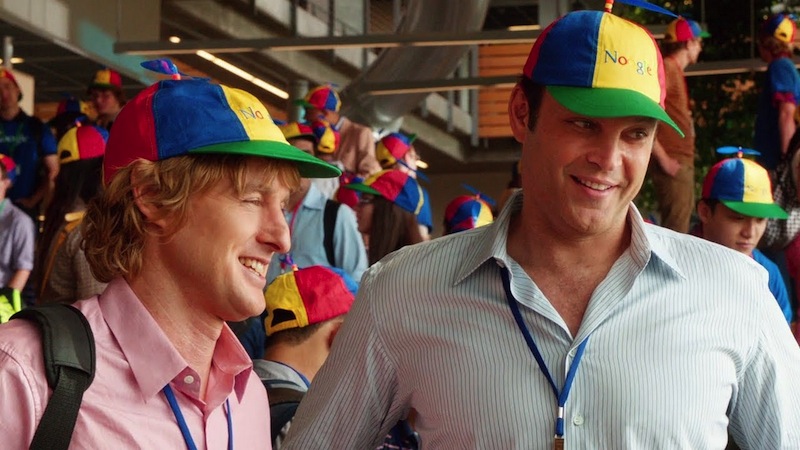 lOver the weekend I caught the movie The Internship starring Vince Vaughn and Owen Wilson, (I know it has been out for a while, I’m not a opening night kind of person I guess), which chronicled in a way that was probably reasonably accurate or at least indicative of, the summer internship program at America’s most wanted to work for company, Google.

Vince, (playing essentially a slightly dialed-down and not quite as swaggered-up version of every Vince Vaughn character in every movie he’s ever done), and Wilson, (playing pretty much exactly the same version of every Owen Wilson character ever, with the possible exception of Lightning McQueen, which was a pretty good stretch for the actor), play two out of work and low on prospects sales ‘grinders’ that talk their way into the Google internship program where they, in their familiar Vince and Owen way, proceed to parlay a combination of humor, charm, street smarts, and hustle to (spoiler alert), win the contest, inspire their colleagues, get the girl, etc. It is actually a pretty enjoyable movie, if a little bit obvious and predictable, and if not for one Flashdance analogy that Vince’s character just rode until the wheels fell off, I’d say it succeeded at what it set out to do.

Some critics have blasted The Internship as not much more than a 105 minute recruiting video for Google, and in a way that is probably a fair point. The entire movie is replete with Googlers, Google products, the Google campus – you get the idea. The seemingly hapless duo of Vaughn and Wilson conduct their initial (and seemingly only) interview for the internship on a Google+ Hangout. Vince’s character also quaffs a few Google Lite beers throughout the film, (actually they were Miller Lites, but that product placement was so obvious and blatant that I am surprised Google didn’t intervene there too). But overall, it is pretty easy to see the movie as a recruiting video, but not just from all the brand and product placement.  If it was just about product placement, then people would leave the movie wanting to find the closest Miller Lite.

No, clearly the reason the movie plays so well as a recruiting piece is that it portrays and showcases not just what all of us on the outside perceive to be the amazing perks of working at Google, (free food, nap pods, volleyball games, on site dry cleaning, a giant slide in the lobby), but also the attributes that make the actual work exciting – the chance to work in small, empowered teams, the diversity of people and thought, the challenge of solving complex problems, and the potential rewards of success.  The summer internship consists of a series of team challenges covering different aspects of Google’s business (coding, tech support, sales, etc.), with the winning team of interns being offered full-time jobs upon graduation. In these challenges we learn that while being incredibly smart and capable is a pre-req for success at Google, commitment, leadership, and effectively working as a team combined with those super-smarts is really the only way to win, and at least in theory, represents the types of people that Google, (or anyone really), wants to have on their team.

Ok, so end of the movie review – the real reason I wanted to write about The Internship really isn’t about plot or pacing or character development. It’s about recruiting, or more accurately, feeding the pipeline. Like any ‘underdog makes good’ kind of tale we are all familiar with, it’s pretty easy to walk out of this film feeling pretty upbeat – but not a generalized, ‘I am feeling happy because the good guys won’, but a much more specific and potentially relevant ‘Wow, what an amazing place to be and to work at’ kind of way.

Again, not really revelatory and not really surprising I guess. And in that adult way or frame of reference most of us would apply, we’d pretty quickly conclude or realize that Google is Google, and everywhere else isn’t and can’t be them, and then get back to checking our email as we file out of the theater.

But then I thought about who was with me at the movie, and who specifically requested that we see this particular movie. It was my 12-year-old son, a bit of a tech geek himself already. If The Internship is truly a Google recruiting piece – I am pretty sure the target wasn’t me (despite my being pretty close in age to Vince and Owen), and it probably isn’t even the college kids that make up the bulk of the interns in the movie, (they already all want to work for Google).

No, I am pretty sure the demo for the recruiting pitch was my son and his contemporaries. Sure, they are not ready or able to even take an internship much less a job at Google right now, but whether it is a maturing tech company like Google, or a powerhouse college football team like Alabama – where future success is not at all guaranteed, and is almost completely incumbent on keeping the talent engine running – the process for attracting, identifying, and pipelining that talent has to start earlier and earlier.

Alabama does it by holding football camps for kids starting as young as 9 or 10, and offering the occasional scholarship to a talented high school freshman. The Internship represents kind of the same thing for Google. No 12-year-old kid is spending time on the Google careers page. But lots of GenX parents, fans of Vince and Owen, probably were sitting next to their 12 or 13 or 14-year-old future tech stars and spent two hours learning about how amazing life and work are at Google.

So maybe you saw The Internship and got a little turned off by the relentless ‘Googleyness’.

But just remember – you’re not the target.

If Google wanted to find you, they would have by now.