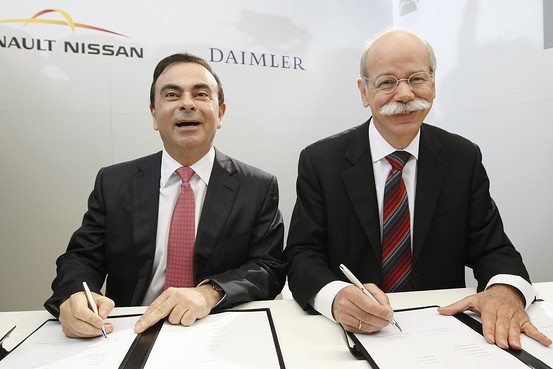 Company and HR leaders both talk a lot of about how we all want passionate, ambitious employees. We say that we would kill for engaged, driven, people that are always striving for more. We want people who are never satisfied and are always pushing themselves. Well, sorta.

Here”s a dirty little secret for most companies: Be ambitious, but not too ambitious. They want you to have big stretch goals but only ones that can be achieved while driving their profits. Most companies never want to hear you say that you might want to work somewhere else, even if it was for a huge promotion. Loyalty counts.

Although companies don”t offer you lifetime employment, they want you to offer it back. But what do you do with a guy who is really respected, wants to move up and who actually says it? In the car industry, if he says that to a microphone, you fire him. From the :

Renault SA”s second-in-command, once seen as a potential successor to Carlos Ghosn as head of allied auto makers Renault SA and Nissan Motor Corp., abruptly resigned on Thursday, days after an unusual public declaration of his frustration at waiting for his boss to retire.

Mr. Tavares”s exit, which Renault said was a mutual decision during an emergency board meeting Thursday, comes two weeks after he gave an unusual media interview. In it, Mr. Tavares said he felt he would never take over the top spot at the French company, saying Mr. Ghosn “is here to stay” at Renault. Mr. Tavares also said he had the talent to run a global auto maker such as General Motors Co.

“My experience would be good for any car company,” Mr. Tavares said in the Bloomberg News interview. “Why not GM? I would be honored to lead a company like GM.”

… Mr. Ghosn was on vacation when he learned about Mr. Tavares”s remarks, a person familiar with the matter said. He was highly upset, the person said, especially after Renault”s French employees complained about what they considered disloyalty on the part of Mr. Tavares.

“He was supposed to be a leader, the guiding light for policy implementation, and yet he was saying publicly he was looking for another job,” the person said.

Renault said only that Mr. Tavares, 55, is leaving the company immediately “to pursue other personal projects” and the company is working on an “adaptation” of its management.

Is this really unreasonable? The guy wants bigger things. Good for him, right? Wrong. Here’s what companies hear when you say you could take on a role outside of the company:

Granted, telling a reporter that you’re stuck because of your boss and that you could do bigger things, might not be the smartest career move, but it’s at least honest. Does your company allow people to openly discuss opportunities outside of the firm, or is that a no-no? At most companies, it’s taboo. However toxic the environment, talking about leaving is seen as disloyal. #Crazy