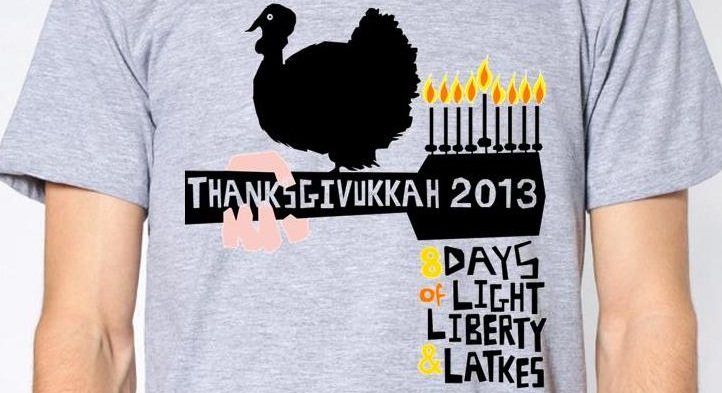 One of the toughest times each year for HR Pros has to be the holiday season. It’s the one time each year that our support for diversity really gets challenged. In most American companies we have the majority of folks who celebrate Christmas, then we have the rest of our employees who fall into one of three buckets of celebration: Hanukkah, Kwanza or non-celebrators. Most of have this all figured out now with some lame all inclusive ‘Holiday’ party, which looks eerily similar to a Christmas party, but we don’t call it a ‘Christmas’ party.

But even before we get challenged with how to celebrate in December, Thanksgiving get’s thrown at us. Seems simple enough, right?  We are just ‘giving thanks’.  I mean who doesn’t like Turkey, Pilgrims, shopping and football!? This is America! Oh, sorry American Indians.

Just when you thought you had it all figured out 2013 comes along to throw you a curve ball!  In 2013, for the first time ever in history, Hanukkah will begin its first night, of 8 crazy nights, on Thanksgiving eve at sundown.  So, let me be the first one to introduce you to — Thanksgivukkah!  Yep, it’s already an official holiday with gear, a wiki page and recipes combining the best of both holidays! Buzzfeed put together an entire guide to help us HR Pros out in making sure we don’t drop the ball for our Jewish/Thanksgiving loving employees! Check it out:

“On Nov. 28, 2013, for the first and only time in any of our lifetimes, the first day of Hanukkah falls on the same day as Thanksgiving.

Here’s what I already know.  Somewhere, in some HR shop, some unsuspecting HR Pros is going to screw this up!  They’re going to do what HR always does and they’ll do one of two things:

1. Pander to the majority: Screw the Jewish employees, they have 7 other days of Hanukkah, we only have one Thanksgiving. ‘Merica!

2. Pander to the minority: Thanksgiving doesn’t matter, we are going to have our pre-Thanksgiving luncheon be Latkes, applesauce and kugel, then make all the employees play the Dreidel game for the three Jewish employees we have on a staff of 700.

So, how should you celebrate Thanksgivukkah?

Here’s what I would do.  I would let my employees to whom this matters, make the decision on how we’ll recognize and celebrate this combination holiday.  I would gather those most passionate about each into a room, talk about how this is an once-in-a-lifetime event and let’s have fun with this!  Be respectful of each other’s traditions.  If the decision is to keep them separate, that’s okay too.

Either way you win. HR doesn’t need to be the holiday police. Give that decision making power away to a council of employees who are a legitimate cross section of your workforce.  Let them run the show.  Could they screw it up?  Yes, and they probably will, but it’s better than you screwing it up.