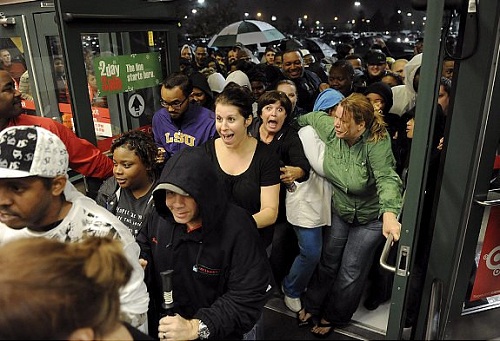 We’re two days away from crazy-town—from the experience that basically defines what a consumer-driven, non-savings-focused culture we’ve become in America. Two days from the time when suburban moms and drifters barely hanging on will find common ground standing outdoors at Target at 4am, in 25-degree temperatures, with a 15-mile an hour crosswind.

Which makes me think about how much stupid **** I’ve bought in my life as an adult consumer. I’ve never participated in Black Friday, but I’m not exempt from poor purchases. Maybe if I would have been a Black Friday guy I would have done better.  After all, there has to be nothing sadder for a retail worker than seeing KD hit the mall at 7pm on 12.23 and see him drift past your station for the 4th time.

But wait!  There’s hope for HR pros like KD and for this post to have a point.  What if we took the features that people want the most out of HR, packaged them as products and put fliers out for Black Friday to sell them in limited quantities?

We’d be rich, that’s what.  If America can add .2% to the GNP by selling 6M Xbox’s on one day, why can’t HR monetize it’s booty?  Sure, there would be outcries, but after the first year, people would just accept this as part of Black Friday.

Black Friday in HR.  Here’s what we’re putting on the flyer today, to drive traffic and make people fight for position outside the HR suite:

1.  The VOTED-OFF-THE-ISLAND PACKAGE.  You’ve got 7 people on your team.  There’s one freak.  He doesn’t really do anything wrong, but no one really likes him.  He’s destroying the team mojo.  Everyone on your team signs off, and he’s not there on the Monday following—wait for it—Black Friday.  Or “HR Christmas,” as it will come to be known.  $399.

2.  SMOKER CAM.  There’s a garden industry being built around hating smokers (see how they fishbowl them in airports), but this one has more to do with location than the choice to smoke.  What “Smoker Cam” does is give you a panoramic view of the smoker’s area outside the building at your company from your laptop or mobile, and you can log in to see who’s having trouble that day and making demonstrative gestures with their hands while they try to control ashes from the bud.  Watch the executives try to stay away from the crazy hourly people, even though they have to go there to smoke. There’s also a Meme-Builder where you can take snapshots and build a viral photo+caption combo at your leisure.  $69.

3. CUBE MOVE NEXT TO THE HOT GUY/GIRL. Things are always more pleasant when you’re next to scenery.  This Black-Friday-in-HR deal allows you to move either next to the hot cube, or have your back to the hot individual in question.  If you keep getting new cube neighbors, look in the mirror.  You’re smoking hot, and the people buying this package forgot to check the details that basically give them no rights to stay there any length of time.  You’re only there until someone buys the package again.  $49 to move to the side of the equator, $99 to move to the cube that allow you to look across into the abyss.  $15 for a creeper mirror that allows you to look across and your screen at the same time.

4. HARASSMENT DRIVE-BY.  This Black Friday deal allows you to pick a person, pay HR, and a HR pro will set up a time to come investigate a harassment situation with the person in question.  There’s no specifics, just a lot of broad questions that start something like “Have you ever… ?”   The package includes at least 10 questions.  $69 for a HDB (harassment drive by) about other people, $99 for it to be implied it’s about the person we’re talking to.  Add $25 to either package for the door closed.

5.  THE “I P*SS EXCELLENCE” T-SHIRT.  The most affordable option, and let’s face it, we’re only doing it to build brand awareness that we’ve got stuff to sell on Black Friday in HR.  The front has the “I P*SS EXCELLENCE” slogan, back says “HR SAID SO” in all caps with smaller subscript that says, “HR BLACK FRIDAY 2013”.  Were actually not sure if you p*ss excellence or not, but we’re building the brand.  $24.

6. THE PEOPLE’S CHOICE 360 ASSESSMENT.  You can’t afford option #1 for the boss that’s not working out or the co-worker that’s killing the teams mojo?  That’s too bad, but we’ve got another option for you.  Scrape together half the money of option #1, have the team sign on the line that is dotted, and we’ll run a 360 on that sucker and promise the results (with a two paragraph summary because who reads those things?) will be distributed to 3 levels of executives around that team.  Affordable at $199.

7.  FAKE EXPLANATION OF BENEFITS MAILED TO THE HOME.  Who knows who’s going to open this ticking time bomb.  The wife?  The mother in law?  What’s included?  How much money do you have?  HR has standards, so we’ll never do something morbid or fatal, but we will have fun with lesser conditions.  There will also be a clear marker on each EOB to show that it’s fake, but most people won’t get that.  EOB for a cold sore that’s loosely associated with an STD—$49.  Condition that causes Viagra to be prescribed—$59.  EOB for Toenail Fungus—$69.

It’s Black Friday in HR.  What are you selling that I didn’t hit?  Tell me in the comments.  It’s time for HR to become marketers, and there’s no better time than Black Friday.  It’s America, dammit.