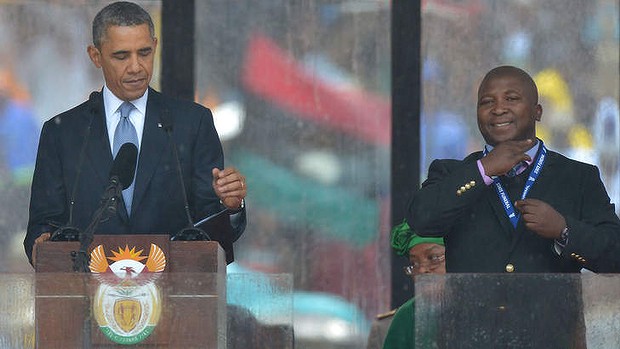 Only, this guy wasn’t a real interpreter. He was basically just standing on the stage flapping his arms about. Saying absolutely nothing.  Well… ok, maybe saying something as Jimmy Kimmel shows us. But, not saying what he was supposed to be saying.

I laugh every time I see this guy on TV. Partially because I know the type.  I bet you know them, too.  This is the person in the meeting or giving a presentation who stands in front of everyone and says a lot of words. As they say them, they say them confidently and without any kind of hesitation. To the uneducated listener, what they’re saying sounds brilliant!

You hear lots of words, some you need to look up, and a lot that you’ve seen used many times on blogs and Twitter. But, if you pay close attention, what they’re really saying is “Blah, blah, blah!”

So, why am I bringing this up? Other than the fact that it’s hilarious to watch this guy gesticulate like he’s at a Phish concert?  Well… I’ve been noticing a similar theme lately in some of the conferences I’ve attended and presentations I have seen.  A few years ago, new to the blogosphere and social recruiting, I ate up so much of what I heard from the more experienced and enlightened people in the community. Now, however… I feel like I am hearing a lot of the same, just with some new words added.  Throw in some pretty slides, and I think it’s fairly easy to get people to pick up what’s being put down—or at least think they are. Repeat some buzz words and say them with enough confidence; it doesn’t really matter if you haven’t practically used the method you’re talking about. It’s not total nonsense, like our South African friend.  But, it’s often not as enlightening as one might expect it to be.

There’s my challenge for everyone!  If you’re giving the same presentation you were giving 5 years ago, it’s time for some new material. If you’re taking the ideas of 5 people and jumbling them into your own presentation, it’s time to be original and creative. People like me still strive to learn from people in the business. But, we want more than just arm waving.