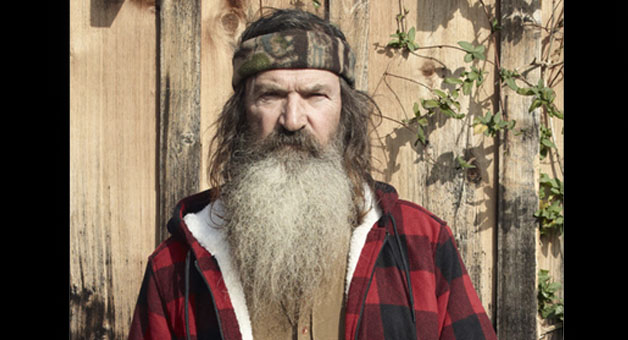 DISCLAIMER: Jason is not a poet.  And he knows it!

Now, sit back kids, grab a chair and relax.
Have a beer and a banana.
Cuz, I’m gonna tell you bout a man named Phil
From the country of Louisiana. (said Loo-Siana for cadence purposes.)

You see, Phil was born to a poor family,
All their food came from the land.
They hunted, they fished, they raised their own meat,
They provided all that they had.

They had no toilet, no TV and no shower,
But the Robinsons just didn’t care.
They were “Happy, Happy, Happy” as Phil once put it,
Speaking though his face full of hair.

Now, let’s fast forward, just a little bitty bit,
Phil growed up and went to school.
He invented a duck call, made a billion-zillion bucks.
You see, Phil Robertson was no fool.

Sure, he’s a little bit different, lives a different lifestyle
Than is used to by you’s and me’s.
He’s super duper hairy and talks kinda funny,
So, in comes A&E.

“Hey check out this redneck,” they say with a grin,
“Crawlin’ in mud and beaver doo-doo.
This is finally something we can put on the air
To compete with Honey Boo-Boo!”

Phil and his family get a new deal,
To televise his family’s shtick,
“Just do what you do. Hunt, fish and talk funny,
People love laughing at hicks!”

So Phil and his family, they did just that,
They brought their lives to television.
But, apparently, A&E didn’t think
That Robertson values might cause division.

Phil has a chat with a rag called GQ,
Being the Phil he’s always been.
“Homosexual behavior,” Phil confidently states,
When asked what he believes is a sin.

“HOLY CRAP!” comes the chorus, mostly hollering from the left,
“Can you believe what he just said?
Pure ignorance and hate coming from this man!
His show needs to be DEAD!”

A&E gets the message, made loud and clear
And proceed with their knee-jerk reaction.
“Phil is suspended indefinitely,
We oppose his clear infraction!”

“NOW WAIT ONE DERN MINUTE!” this time from the right.
“You’re infringing on Freedom of Speech!
He’s just saying what he truly believes!
This is pure elitist nonsense!  Sheesh!”

“Oh no,” says the network seeing now what they’ve done,
When they suspended the ol’ feller.
“We didn’t properly consider the repercussions of,
Messing with our #1 seller.

With millions at stake and no clear exit plan,
Unsuspend Phil they eventually did.
But, doing damage control, they loudly proclaimed,
“WE STRONGLY DISAGREE WITH WHAT HE SAID!”

So now everyone’s pissed, no one is happy,
But the Duck family moves on as planned.
Leaving us to wonder how long must pass
Before the next family member is banned.

So, boys and girls, I hope you were listening
I’ll make it quick cuz I know that you’re tired.
When you’re purposely appealing to a certain demographic,
You should think before you fire!