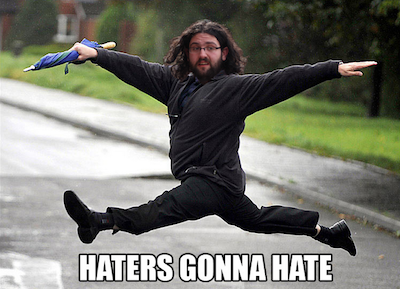 Your friends who hate their jobs—we all have them… and its brutal to talk to them, isn’t it? Man, I just cringe when I ask them how their week was—I know negativity and moaning is coming back at me. When they start in about their bad jobs, bad boss, etc., I get responses that are like unfunny Norm moments from Cheers.

Stan’s my friend who really gets under my skin. He’s the one who blames his manager for all that is wrong in his world. You knew this kid in high school—“I would totally be the starting pitcher, but Coach hates me.” Sure, Skippy, you’re Cy Young. Coach is what’s holding you back.

You also meet people like Stan at your kid’s game, at happy hour or at neighborhood parties. Always, always talking about work:

Here’s the deal: Most managers or coaches want to win, perform well, hit their bonus, etc. More often than not, they are going to do whatever it takes to win. Whatever it takes. Very few sane people hamstring their own professional development just because they don’t like someone. God knows I have worked with plenty of people I didn’t like… if they performed.

When I am throwing back a chicken wing and a beer on Stan-the-neighbor’s deck, listening to him prattle on about the Fargo realignment team, I try to break down the situation and figure out where he falls on the below list.

Look, I know some people have bad bosses, but I also know that a lot of people blame their bosses for stuff that’s really on them. Stan is an example. He’s a number four, by the way. He likes being one of the boys, and he doesn’t want to do the hard leadership work that would get him promoted. But he’ll still bitch about not getting the promotion and blame the boss. Beautiful. Pass me another beer and some wings, Stan.