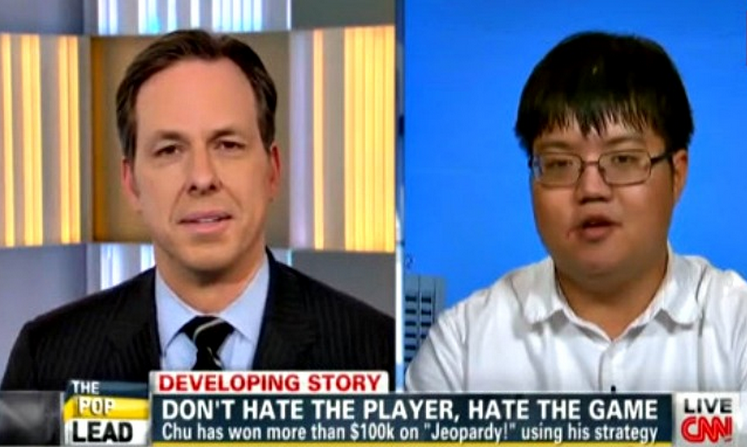 If you follow the long-running TV game show Jeopardy!, then you are probably familiar with Arthur Chu, whose recent run of success on the show has been both fascinating and polarizing. For those who might not be familiar with the story, Chu debuted on the show January 28th, and almost immediately began doing two things. One, he started winning, and at times dominating his competition, racking up some impressive monetary totals along the way. And two, Chu began alienating and frankly, pissing off, long-time fans of the show.

Why is Chu eliciting that kind of reaction in both hard core and more casual fans of Jeopardy!?

Because he isn’t playing by the (mostly) unwritten rules; he isn’t predictable and “safe;” and he is applying data (along with some intuition) into an aggressive, advanced game-play strategy that both his rivals on the show are unable to match. That has led many fans of the show to express their ire with Chu for an approach with which they are just not ready for, or comfortable with.

Chu’s technique is simple and genius at the same time: He bounces around the game board apparently at random, rather than choosing the clues in a given category from top to bottom, as most contestants do. This method is harder to watch, as viewers generally prefer to get attuned to a series of questions in the same category before moving to another. Chu’s style doesn’t let anyone, competitors or viewers, get very comfortable. But the style isn’t “random” at all. Chu is aggressively seeking the game’s Daily Double clues, which statistics show are a player’s best chance to build a sizable and at times insurmountable lead over their rivals.

Hard-core Jeopardy! fans are not happy. Chu, (and it seems like he is eating up even the negative attention), has been pilloried on social media for some combination of his playing style and his perceived arrogance and rudeness towards the show’s legendary host Alex Trebek. And for what it is worth, Chu did not invent this style of play. The technique dates back to 1985 when a five-time champ named Chuck Forrest, first executed this find-the-Daily Double attack. The “Forrest bounce,” as fans still call it, keeps opponents guessing. Forrest (and now Chu) knows ahead of time where the next clue would pop up; the other contestants don’t.

Why does this matter at all, or, why does “Chu-phoria” belong on a HR/Talent blog?

Because your reaction to Chu, or a person like Chu, reveals quite a bit about your tolerance for some of the elements or traits of many high performers that—at least on the surface—are a little off-putting but don’t really matter if you truly care about high performance in the end.

Chu looks, acts, plays, behaves, and overall comes off almost entirely different than what Jeopardy! fans have come to expect, appreciate, value, and understand. By playing in a different and jarring manner, (not breaking any official rules, remember), he is challenging the fans’ perception of the game, and their understanding of what a Jeopardy! champion should be. But he’s winning. He’s a classic “high performer.”

But would a person like Chu find a home in your shop? Would his foibles, like his rumpled shirt and badly tied tie be accepted or at least tolerated?

Would you listen to him? Would you advocate at least trying some of his an uncomfortable ideas even if he had the data to back up his approach?

Would you care that he doesn’t seem to fit the mold of the other high performers on the team, or the people that have had his job in the past? Would you listen to the long-time employees, many of whom will almost immediately start griping about Chu?

It’s much harder to find and convince the higher-ups to take a chance on, work with, engage, and support a “doesn’t-fit-the-mold-but-is-the-smartest-person-in-the-room” guy like Chu.

But Chu is playing a different game and the question for the HR/Talent pro is: Would he be allowed to play a game like that in your shop, as well?