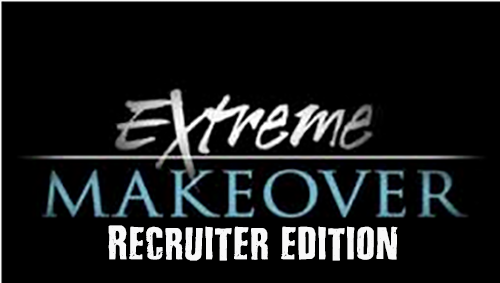 Everybody loves lists.  Tim Sackett hates them.  But now that he’s on them, he hates them less.

We’ve got a webinar tomorrow at FOT called “The Recruiter Makeover: 7 Ways Recruiters Can Reinvent Themselves as Marketers” (click the link to join us).   The webinar is sponsored by our friends at Jobvite, and we’re going to be digging hard into all the changes the recruiting industry has seen and how difficult it is to get the attention of the candidates you really want in your pipeline. Join Holland Dombeck from Cox Communications and me for the webcast as we dig into the marketing techniques that smart recruiters are adding to their game.

If there’s one thing we love at FOT, it’s a great production recruiter that doesn’t bull$h!t around, works the phones to get positions filled and gets things done.  Those people are gold.

But as things continue to evolve, we’re convinced that the smart recruiters out there are starting to shift from a pure focus on production to also understanding that they have to add marketing chops to their game—while they maintain production.

We’re calling our webinar a makeover.  So it stands to reason that we’ll have some before-and-after photos.

For the “before” photos, we’re basically going to be ruthless to any celebrity that’s had a bad mugshot taken.  Hit me in the comments if you’ve got one you want us to add.

The “after” photos to the makeover?  That’s where our Top 5 List of Recruiters Who Are Great Marketers comes in.  If you follow our list of things you can do to reinvent yourself as a marketer who just happens to recruit for a living, you’ll end up looking like the folks we’ll feature on tomorrow’s webinar.

As a preview, our Top 5 List of Recruiters Who Are Great Marketers includes the following people:

If you’re still reading, we think that these people are (or have been – lifetime achievement award, etc.) great recruiters who understand the importance of the marketing part of the recruiting game.  We’ll feature these people a bit on the back half of the webinar, and tell you why we think it’s smart to emulate them.  They’re all incredible in their own way.

Join us if you’re interested. Looks like we’ve got 500+ signed up right now and we’ll make it fun.

Harry, Paul, Heather, Jessica and TBD (hell, it might be you?)—thanks for inspiring us!