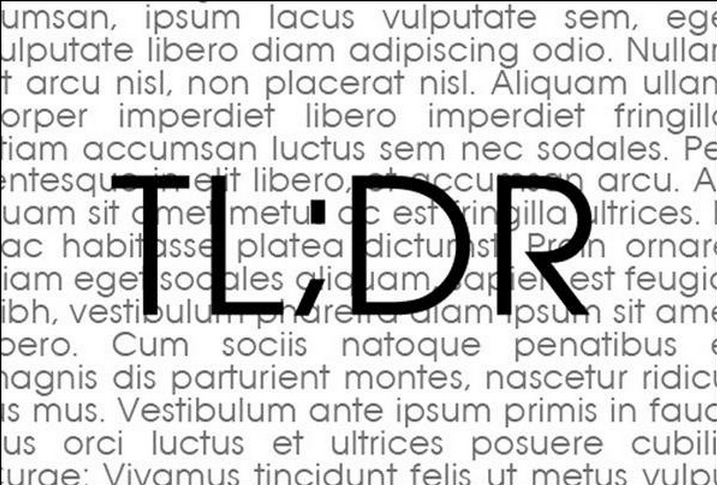 No one has any time for your nonsense.

You know the acronym TL;DR, right? In case you are not familiar, I will save you 15 seconds of Googling. It stands for “Too long; didn’t read” and essentially means that an article, manual, set of instructions, whatever… failed to keep the interest of its intended reader long enough to actually inspire them to finish reading the entire piece.

After a sentence or two or three, the reader checks out and—if they are the kind that likes to give you a little stick in the ribs as they depart—they will issue a “TL;DR” comment. And whatever important points you made 237 words in are lost to the ether, destined never to be heard from again.

It isn’t just written content for which the modern audience has a diminished attention span. Check out this recent analysis of listening habits from the music streaming service Spotify: Data Show Our Attention Spans Have Become So Short, We Can Barely Listen To a Whole Song Straight Through. According to a study of Spotify users, nearly a quarter of all songs are skipped within the first 5 seconds of play, and about half of all songs are skipped at some point, i.e., the user does not listen to the entire song.

If music fans can’t even devote two minutes to get the the end of the song, (and often only give it five or ten seconds) then as an HR and Talent pro, what chance does your “important” communication have at actually being read to the end? My suspicion (and probably yours, too), gleaned from many years of experience (and the realization that no one reads anything from HR), is that probably only about half of what you write (or record or film) is going to get consumed by your audience. And that might even be optimistic.

How can you combat the “TL;DR” phenomenon? Here are some ideas.

1. Cut the word count way, way down. Reduce it by half if you can. This post (up to this point) is about 350 words, and it really needs to end in about seven more words or there is no way you will finish reading. Edit ruthlessly and aggressively. If you can’t fit the communication into a couple hundred words then you might want to split it into component messages.

2.  Write better headlines. Almost ten years of blogging has taught me one thing: about half of a given post’s traffic can be attributed to the post title. You have to sell your message in the title (or in the subject of your email if you are sending out some kind of employee communication via email). If you are not sure what titles/subjects will work the best, do some split or A/B testing and see which subject lines generate the most opens and clicks. Half the battle is getting your audience to click “Open” before they hit “Delete,” and that decision is 100% based on the subject/title.

3. Write “single message” communications. Even if the audience reads the entire message, the amount and number of distinct elements of the content that they are likely to remember are pretty limited. In fact, they only might remember one thing in your two-page long memo. You can fight that tendency with a great title, clever copy, some snazzy images, etc., but you still might lose the “TL;DR” short-attention span battle.  The best chance of your point getting read and retained is if it is the only point that you’re asking the reader to actually consider.

4. Lead your online job postings with the single most important idea you are trying to get across. If you are getting too many unqualified applicants, you are not doing a good enough job in your copy to engage better or more qualified folks. What are those people interested in? What would motivate them to actually spend precious internet time on your job ad? Ask some current strong performers what the single best thing is about working for you, and put that in the lead of the job ad—not some rhetorical and boring question like “What do you think when you think of industrial fasteners?”

In our short attention span—with seven things going on at once—if it can’t be expressed in a 140-character world, we all have to get better at getting to the point. Make it short, make it snappy, make it memorable and you might have a shot at keeping the reader for a few extra seconds—maybe even longer than the average Spotify song listen. If not, you are just going to get skipped and that is the cruel truth in our new “TL;DR” world.