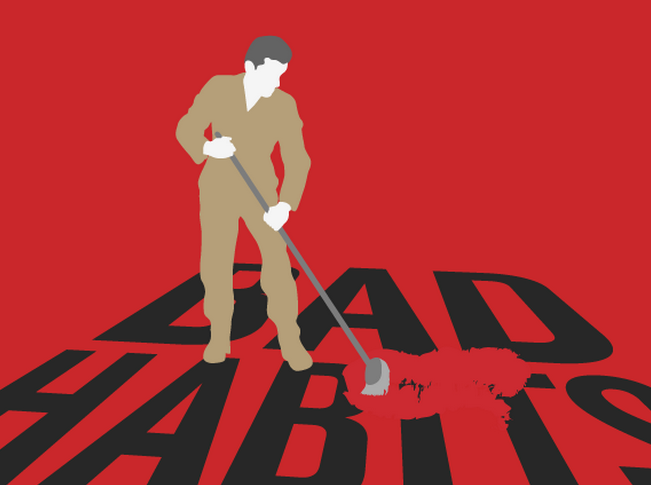 Leaving the toilet seat up (in a house full of women).  Talking with your mouth full. Eating a dozen doughnuts at 2AM. Drinking too much. Sensing a pattern? Yeah, all of these things might be fun to do, but they’re really all just bad habits that we’ve fallen into over time.

Put another way, these are the things we either a) like to do that other people find really, really annoying (and we don’t care), or b) the annoying things we do that we have no idea others find annoying. And believe it or not, this guy even has a few bad habits of his own! This year, my summer reading list includes The Power of Habit:  Why We Do What We Do in Life and Business.  It’s an amazing book with many applications to the work we do as HR Pros.  I highly recommend you pick it up. Reading this book has not only made me aware of some of the habits I have; it’s also given me some hope that I can break them, too!  Since the Supreme Court decided that organizations are people too, it should be no surprise that they can develop bad habits, as well.

1. Promoting really talented assholes. These are the people who are always one of the smartest people in the room and not shy about letting everyone around them know it. In the workplace, they deliver and then some. They’re at the top of their game technically, and there are few out there who could replace their intellectual horsepower.  Thing is, no one wants to work with them.  They’re cranky, rude, a bit of a lone wolf, and quick to take credit. And boy do they advocate—mainly for themselves. But even though they fail on the values front, they get promoted. Sometimes more than once. Yes, this quiets them down for a while but everyone else in the organization takes notice.  What they noticed was that all this talk about the importance of values was a big crock of B.S.

What to do:  Here’s some radical advice. Don’t promote them!! Don’t get caught up in the technical wizardry of one person and, instead, trust in the collective intelligence of your people who aren’t assholes!

2. Making counter offers.  If organizational life were a relationship, making a counter offer would be the equivalent of “Baby, I can change, just give me one more chance. This time I mean it.” Ever find yourself in one of those situations? Remember how it ended? Making a counter offer to someone is really just an insult. It’s a thinly veiled way of saying “Yeah, I kind of Knew that we were underpaying you, but I didn’t think you knew or would figure it out.” In fact, making a counter offer is usually more about the manager realizing they’re going to be screwed than it is about doing what’s right for the person who’s leaving. What’s worse is this rarely stays a secret in an organization and when people find out this is what Goes on, they typically aren’t happy.

What to do: Check in more frequently with your people. Make sure they’re challenged. And if you feel like they’re underpaid, be proactive and address it.

3 .Throwing new hires into the fire.  This is a classic bad habit—short-term gain at the expense of the long-term sustainability. We all know this movie. An important new hire is made and even though we know it’s really important for the new hire to learn about the organization, build relationships and get their footing, we throw them directly into their new jobs. Now, I understand why we do this as there’s likely a ton of work to get done.  But study after study has shown that going slow during those first weeks of a new hire’s tenure and allowing them to learn pays dividends down the line in performance and retention. But like most bad habits, we only focus on the short-term gains.

What to do: Ramp up your new hires slowly over their first 3-4 weeks so that they have a chance to learn before jumping fully into their jobs.  Maybe that means hiring someone a little earlier than you were thinking or getting creative with staffing, but it will be worth it in the long run!

Back to the book, The Power of Habits. Seriously, pick it up as it will change the way you think about managing change in organizations.  And it may even break a bad habit or two of your own while you’re at it!