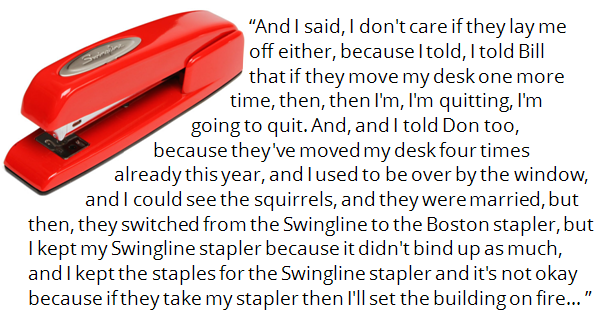 We’ve all seen the studies—heck we’ve been beat over the head by them in the last few years.

Recognition will cure whatever ails your company!

Over the past 10 years, that mantra has caused recognition and reward companies to spring up like patent medicines in the 1800s. And many with the same overall impact. But that is a post for another day. 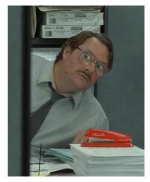 However, what caught my eye this week was an older article from the Huffington Post about being ignored at work and the impact that has on workers. Leading off with the now iconic image of the actor Stephen Root as Milton Waddams from Office Space (100 trivia points for knowing his character’s full name), the abused stapler-loving employee of Initech, the article discusses bullying in the workplace. Specifically they reference the impact of a more covert type of bullying—one that, according to the study referenced, is considered socially acceptable and less harmful than direct bullying. They are talking about “ostracism.”

While we may think ostracism is more “socially acceptable and not really bullying,” the study showed that…

Of the 1,300 surveyed in Robinson’s study, the people who reported having experienced ostracism were more likely to feel job dissatisfaction, were significantly more likely to quit, felt less committed to their work and experienced greater health issues.

Researchers also compared the results of the surveys with turnover rates three years after the surveys were conducted and “found that people who reported feeling ostracized were significantly more likely to have quit,” per the study.

Much like pleading innocent because you “didn’t do anything”—yet stood by while someone was bullied and abused—ostracism is bullying by omission. By not providing any input—negative or positive—you are in effect bullying. Even feeding a starving person a bad meal is better than not feeding them at all.

I wonder if recognition is the same?

So it seems Oscar Wilde was spot on.

As human beings we crave attention. And it seems ANY attention is better than none.

I’ve made a living helping companies find ways to validate their employees in order to drive business results. But I always focused on recognition—the active validation of a behavior. It never struck me that there could be a negative associated with the withholding of recognition. Old dogs do learn new tricks.

For those managers who believe the bi-weekly “recognition” event called a paycheck is enough to motivate and engage employees I say—Phffffffftttttttt… !

Seems anti-recognition—ignoring employees, even when unintentional—can have a huge impact on your employee base. I would seriously consider reviewing the reports that come out of your recognition system to ensure that every employee at some point has received some sort of validation and recognition. Teach your employees how to provide recognition and validation. Remember, it’s not always about Oscars and Nobel Peace Prizes. Recognition is simply the act of noticing and validating someone’s efforts and impact. Thank yous and attaboys/girls count. Heck… providing gentle guidance on how to do something better shows you recognized and noticed the employee.

Saying nothing is the real problem.

Again, from the article:

The findings of the study revealed that having no role to play in work culture “was more detrimental to one’s well-being than having a negative role to play.”


I guess now I can go back to my Mom and say, “See—you were wrong when you said if I didn’t have anything nice to say I shouldn’t say anything at all. Turns out I should.”