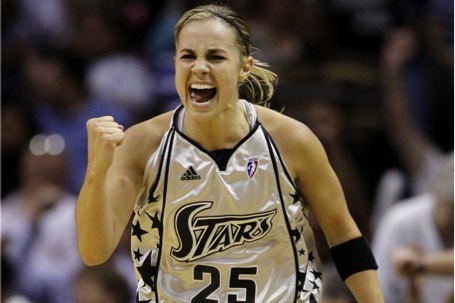 Sports is a man’s world. Do you know who won the last WNBA Final? Yeah, me either. What about how many major tennis championships Serena Williams has won? Crickets. Can you name anyone on the LPGA tour? Good luck.

On August 5, Becky Hammon put another dent in the gender bias towards women when it comes to sports. Most women can’t dunk, but that doesn’t mean we aren’t great athletes or phenomenal coaches. Hammon joins Greg Popovich (Pop) and the San Antonio Spurs organization as the first woman assistant coach in the NBA. Hammon was top news next to Johnny Manziel and my beloved Browns on SportsCenter. She’s kind of a big deal.

As a young professional woman (not to mention a basketball junkie), I find Hammon’s story just flat out cool. But I don’t find it earth shattering. In HR and workplace blogs, the topic of women in leadership and the advancement of women comes up almost as often as a Katy Perry single plays on the radio. It’s WAY OVERPLAYED. I’m not saying it’s not an important issue, but what I am asking is how do we turn this issue into something that’s no longer breaking news? When will a woman CEO no longer be an oxymoron? When will it be the new normal?

There are three forces working together, preventing women from accessing the highest offices (or coolest cube).

At the end of the day, that huge job – the one with a gazillion dollar salary and enough direct reports to establish city limits within your office, the one that you’d be crazy  to say no to – isn’t the job you wanted. Research shows twice as many men aspire to be in the C-Suite than women. But, here’s the thing: If that’s not in your plan, that’s okay. Whatever the reasons may be, becoming the Diana Taurasi or Maya Moore within your organization might not be your Jay-Z Holy Grail.

You’ve got to want it. Without this, the next two forces don’t matter.

2. Women believe they can’t succeed in the role.

Unlike The Hunger Games, the odds are not in your favor, and this can be discouraging. There isn’t a plethora of Marissa Mayers or Mary Barras out there, and the ones that are still don’t have the clout of a Jack Welch or Steve Jobs. However, my good friend MJ said, “I can accept failure, everyone fails at something. But I can’t accept not trying.”

You may be staring down the scariest boogie monster out there, an all-male leadership team (yikes), but so what? If you want it, go get it.

Ruh-row. The boys club won’t let you in. You tried. You made your presence known – a qualified, polished, decisive and analytic presence at that. And yet for all the progress that’s been made, some organizations still just don’t get it. It’s kind of like that parent who doesn’t realize their kid just isn’t very good at basketball.

Whether it’s organizational dynamics, biased hiring practices, or simply put — ignorance — sometimes wanting something and going after it isn’t enough. Control what you can control.

It’s great to see Becky Hammon as a coach in the NBA. She wants it, she took it, and she has a guy like Pop who gets it. However, the reality is that the representation of women in leadership positions across most organizations and the Fortune 500 CEO list is similar to the number of stoplights in Hickory, Indiana. When the advancement of women is no longer an overplayed pop song, when “the first woman to… ” is no longer headline news, that’s true progress.

How will you change the narrative?

Nicole Plant is currently the Marketing Manager at Taylor Strategy Partners, a talent acquisition and management solutions firm that’s been in business for over 40 years. She’s a Millennial through and through with a passion for sneakers and fresh brewed Starbucks Iced Coffee. As the glory days of being an athlete, sorority sister and grade chasing student have passed her by, she’s found herself in the world of Talent Acquisition and Management. Meshing her generational point of view with her career at TSP, Nicole created her blog Interview with the Geek and she’s now published on LinkedIn . There are countless posts about millennials written by non-millennials. Let’s give Gen-Y a voice.