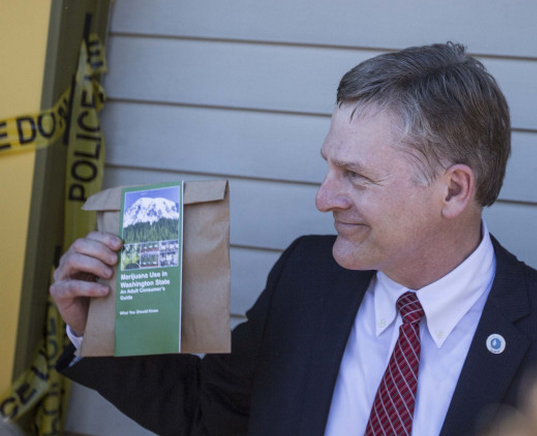 There’s a story kicking around my hood that I thought FOT readers might enjoy.

You may have heard, during the 2012 election, the educated/enlightened/hipster voters of the great state of Washington, together with our progressive friends in Colorado, decided to de-criminalize marijuana. The feeling is that it’s not as harmful as other things we put in our bodies (tobacco, alcohol, Twinkies, etc.) and we are currently spending too much time arresting people and throwing them in jail for going all Ringo and getting high with a little help from their friends.

Now, when the new laws officially went into effect, the state made it very clear that this was a legal move only. People would no longer be prosecuted for pot usage or for being high. However… employers were still free to do what they wished. No-drug workplace? Fine. Keep your rules. Drug testing policy? A-ok! You can keep it.

And, this is where it gets exciting!

The City of Seattle, a government entity, still has drug policies. Our elected City Attorney, Pete Holmes, was a huge supporter of the marijuana initiative. When the first public pot shops opened a couple months ago, Mr. Holmes was one of the first in line to partake in his new right to purchase weed without being arrested.

All fine and dandy so far.

In front of press cameras, our elected city attorney purchased two bags of pot. He publicly declared to reporters that he intends to save one as a relic of sorts. The other, he plans to light up! After all… this is a historic moment!

Ok… I don’t love that my kid hears a member of our government talking about doing drugs, but whatever. I can have that talk later.

It’s his next step where Mr. Holmes screws up. You see, the average work day of a city attorney is pretty busy. Mr. Holmes is no exception. So, rather than swing by his home to drop off his new purchase, Mr. Holmes goes back to the office, throws 4 ounces of weed into his desk, on city property, in a drug-free work zone, and goes about his day.

And, the next day, according to news outlets, he received a nice little note from HR.

You see, apparently, if he were a regular old working schmoe, he would have quickly been punished. Not only was he in possession of a substance still banned by Federal law in his workplace, but he used “company time” to go purchases said substance… also a significant no-no.

Obviously, however, Pete Holmes is not some dude out fixing pot holes. He’s the city attorney. An elected official. You can’t just fire the guy! But, after a little nudging from the mayor (and after a lot of pressure from the press), Mr. Holmes decided to apologize and said he would donate $300 to charity.

“Wait just one darn second,” says HR one more time.  “If you were a regular city employee, you would have been suspended for a week!”

“Fine!” responds Mr. Holmes, eyes glazed in frustration before he ups his donation to $3,000.

In the end, the punishment was probably much more about public opinion than anything substantial. But still, HR stepped up to make sure that this official didn’t sit on a higher pedestal because he was elected. He was being held to the same rules as all the other regular city employees. He was expected to also be compliant with Federal regulations, even though he was a political supporter of a controversial topic. The rules are black and right, Mr. City Attorney. Come off your pedestal so you can read them.

Anyway, there you go. A little story from my neck of the woods. I am curious what others think.  Do you think he should have been punished more? Would you have let it slide?

This whole incident has me wondering if Congress has an HR team? If so, maybe they can write in some new performance management expectations.