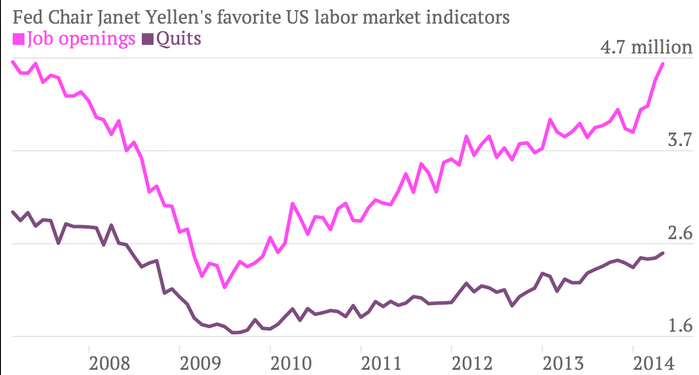 Are you a fan of monetary policy, macro economics, and Federal Reserve Chairperson Janet Yellen?

Of course you are! That’s why you’re reading FOT, a blog that is (usually) about none of those things.

Except for today, when I’d like to take a quick look at the five major labor market data points that Chair Yellen analyzes as she sets out her (and really all of our) strategies on setting benchmark interest rates and how/where/when to use monetary easing or tightening to try and influence the American economy, and how similar analysis of related metrics in your organization might help you take the measure of your firm’s economic health.

Hourly pay normally rises between 3 and 4 percent in a healthy economy, Chair Yellen observed in March. In a growing economy, with a falling or historically low unemployment rate, businesses usually must pay more to attract and retain workers.

How do those numbers stack up against your figures? Are you keeping wages competitive and, perhaps more importantly, consistent with your talent management objectives? Are you allocating wage increase budgets to the most impactful roles/people in the organization? Wage pressure is kind of like politics—it is usually local and specific. No way can you be successful long-term by applying blanket 2 or 3 or 4 percent increases across the board. The best folks will be insulted and demand more (or will walk) as the economy continues to strengthen and more businesses look to raise wages to stay competitive.

About 7.5 million Americans are currently working part time but would prefer full-time jobs. That figure is down from a high of 9.2 million in 2010. But it’s still up significantly from roughly 4.5 million in December 2007, and the start of the economic recession. This represents a sizable number of people that have jobs, so they technically are not counted as unemployed, but would prefer to be working more, and represent an underemployment drag on the economy.

Are you using more part-time workers than in the past? How about contingent workers? And if so, what kind of impact do these kinds of changes in the workforce mix have on the overall skill level of the workforce and your company’s ability to execute on important objectives? Could there be some great underemployed people in your own company right now who would be a great fit for one of the open full-time positions you might need to fill?

The number of Americans unemployed longer than six months sits at about 3.2 million, far above the pre-recession level of 1.3 million. Chair Yellen worries about the long-term unemployed  because research has shown that often the longer people are unemployed, the more reluctant employers are to hire them.

There are a couple of spins to this data point for HR/Talent pros. One is kind of straightforward—simply are you doing anything that unfairly puts the long-term unemployed at a disadvantage when they apply for your open positions? Do hiring managers not even want to consider unemployed candidates at all, much less ones that have been looking for work for six months or more? The other spin on this is to look at your top 5% or so of open positions that have been open the longest. What is it about the role, location, comp package, etc. that is causing these positions to sit open in what is for the most part an improving labor market?

The proportion of working-age adults who either have a job or are actively looking for one has fallen since the beginning of the recession, from 66 percent to about 63 percent. Many of the non-participants have either have returned to school, retired from work, stayed home to care for relatives or gone on disability benefit programs.

The sort of similar metric for your organization that comes to mind here is the number of open positions divided by the total number of employees + the total number of openings. The result is the percent open rate and while kind of interesting on its own, driving that down into categories and location levels make it more interesting. Take sales or other direct revenue producing positions and check the open rates and the trends over time. How much potential revenue is sitting “open” right now? If the open rates on non-revenue groups are much lower, could it mean you are not allocating HR/recruiting resources and efforts in the optimal revenue resulting mix?

The stronger the economy, the more people are likely to quit their jobs. They typically either have found a new job—often with higher pay—or they’re confident they can find another one quickly. More quits also free up jobs for the unemployed. Quits have risen since the recession ended, but they remain below levels consistent with a healthy economy. The government also tracks the number of people actually hired each month. Yellen wants to see employers actively adding workers.

Probably the simplest translation of all the Yellen data points to individual organizations are quit and hire rates. But just like most of these other metrics, the real key is diving deep into specific areas of the organization, role types, locations, and skill set categories to see if an increasing quit rate is impacting your organization’s ability to execute. Lots of folks look at “regrettable” turnover, i.e., the number of above-average workers that quit, but sometimes even an average performer leaving might cause more damage if that person is in a more important role or one that is proving harder to backfill. Either way, these two piece of data, quits and hires, can tell you much about the labor market’s macro assessment of your employer value proposition. If good people, or high-demand skill people, are quitting faster than you can hire back, then you are losing relative to the market and your competition.

Those are the Big 5 labor market data points that Janet Yellen looks at each month as she sets out policy, makes recommendations, and issues guidance to Congress about the health and state of the American economy. Similarly, you can take 4 or 5 or whatever the “right” number of workforce metrics are for your shop and use those to set your own policy and make recommendations to your CEO. The cool thing about Yellen’s five are that they all measure the health of the labor market in different ways, but they contribute to the overall story. And that is exactly what you should be doing too—capturing data, performing analyses, and communicating your own talent story.