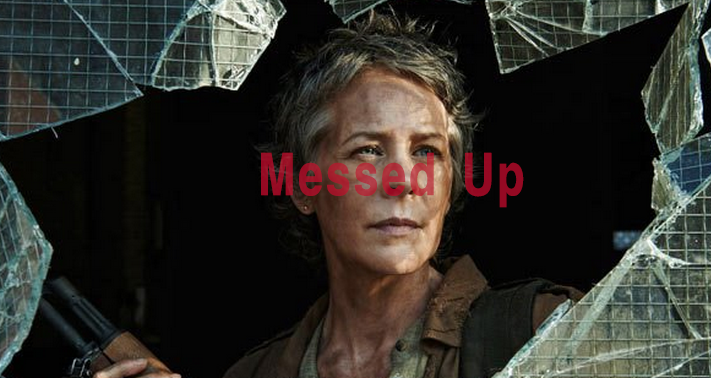 First of all, if you haven’t watched the season premier of The Walking Dead, come back to read this after. This is a talent blog, not a spoiler site.

You work in an office with limited space. Everyone in the office relies on one another to get their work done. It’s pretty close quarters. So, when one of you gets sick, it can quickly spread to others in the office.

Oh… and, if you die, you come back as a zombie and eat everyone around you.

Now, imagine that an unknown sickness has just infiltrated the office, infecting a couple of your fellow co-workers.  Do you…

A)  Keep on keeping on, pretending everything is normal and trying to avoid these sickies?
B)  Have these sickies work in a separate part of the office in an effort to not infect anyone else?
C) Stab them in the back of the head, drag them outside of the building and burn their bodies?

If you chose “C,” you and Carol think the same way… and I am not coming anywhere near you if I get a cough.

Now, according to most everyone else, Carol made the wrong choice. While many in the office—sorry, I mean prison camp—succumbed to their illnesses, resulting in a zombie outbreak that took out even more, the crew was eventually able to procure the medicine needed and move on to bigger and better things—like fighting the governor.

Still, because of her poor decision, Carol was fired.

Fast forward to Season 5. Our heroes are trapped in a precarious situation, with no obvious way to escape.

That is, until Carol shows up and goes all post-zombie-apocalypse Rambo on the place. Then, HEY… whadya know… everyone is saved and back to what they do best! Putting sharp objects through skulls and wondering when someone will cut Carl’s hair.

So what’s my point? Other than to, once again, bring pop culture into one of my posts? It’s this:

Even our best leaders make mistakes. We’re all human. Sure… Carol probably should have, at the very least, consulted some of the others before putting a knife through someone’s spinal chord. Maybe she should have better considered how her brain piercing would be received with that particular group of survivors. But, the fact that she made one dumb choice did not prevent her from launching a firecracker into a freakin’ propane tank. Can you do that?

Carol clearly did not obtain proper guidance from her colleagues. But, this didn’t mean she wasn’t able to jump into the trenches, covered in zombie guts, and mow down a bunch of cannibals with her machine gun! Or get in a totally bad-ass fist fight with a crazy woman before unleashing a heard of zombies on her.

Carol was chosen to be a leader at the camp for many reasons. Because she’s smart. Because she’s brave. Because she always thinks of what’s best for the group and for the survival of those in her care. So, she made a mistake. Have you never done or said something stupid? Something you regret? We’re all human. Even our leaders. The real question is… will Carol learn from her mistake? Does she understand that there is a better way?

I’m glad Carol’s back! Because Carol kicks ass! I forgive her. I’m excited for what she’ll bring next!