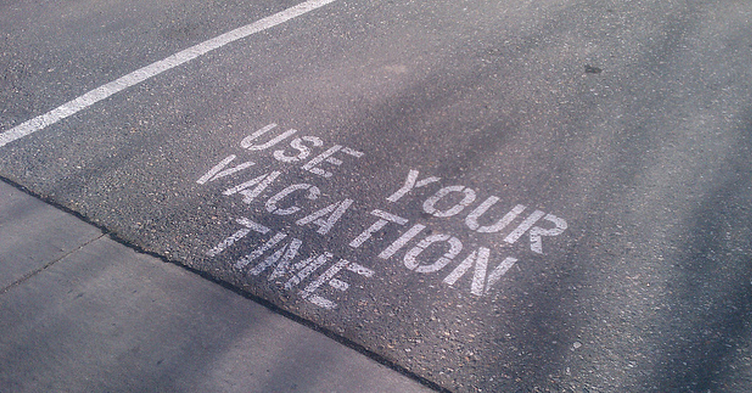 It’s late October and as the last six weeks or so of 2014 begin to wind down, if you are like many other American workers, you are facing a crisis of sorts. Not the “normal” type of crises that sometimes pop up at this time of year like “Do I have to wear a Halloween costume to work on Friday?” or “Really, another holiday cube decorating contest?”

No, the crisis I am talking about is your need to figure out just how are you going to burn up your 17.5 (or whatever your exact number is), remaining days of PTO for 2014 before the end of the year. That is something like three and a half weeks of time off and there are only about 45 working days left in the year. Probably not going to happen. Besides, even if you could cram that much PTO into the last few weeks of the year, then who is going to take care of the Penske file? Who else but you can figure out the nuances of the company’s arcane accounting system in order to make sure everyone’s T&E gets processed by year-end? Who besides you knows how to make the break room coffee in JUST THE RIGHT WAY?

Truth is there is ALWAYS some kind of reason popping up that keeps lots of us in the office when we really should be taking some time off. Think wrestling with a bank of unused PTO is only a problem for you? Think again. According to a recent study conducted by the global advisory firm Oxford Economics for the U.S. Travel Association, the average worker earns 21 days of PTO each year but uses only 77% of that time, forfeiting about 4.9 days—essentially skipping a week of vacation that you have earned. Additionally, permanently lost PTO days totaled 169 million, or 1.6 per employee, in 2013 making America “a PTO graveyard filled with unused vacation time.”

There a few interesting repercussions from all of this unused PTO. Employers get the benefit of essentially “free” labor from workers who are toiling away when they could be on the beach somewhere. The Oxford Economics report estimates that the 169 million lost days of PTO equates to about $52B in value for organizations. But this free labor is not all a win for the organizations, because much of that banked PTO has to be carried on the company balance sheet as a liability, and often has to be paid out in full when employees leave.

And to make matters worse, one of the reasons that employees don’t like to use all of their PTO, the notion that by skipping their PTO they will appear more dedicated to their work and get rewarded for that dedication, actually doesn’t really materialize. According to the study, employees who left 11-15 days of PTO unused annually were actually less likely to have received a raise or bonus in the past three years than those who used all of their PTO. In fact, the only thing these employees may gain is increased stress. Moderate or high levels of job stress are reported more often by PTO skippers than by “slackers” who take all of their annual PTO.

It is kind of a strange and sad commentary on the nature of the PTO conversation in America, which lately has mostly centered around whether or not so-called “unlimited” PTO policies make sense for employers and employees. While sounding like an incredible benefit and perk for employees, it seems like, if the Oxford Economics study on traditional PTO is a fair barometer, that unlimited PTO policies will not really change a fundamental aspect of the American workforce. That we probably work too much, don’t take enough time away from work, (I am not even going to mention how many nights and weekends we spend sending work emails from our phones), and more than likely feel the worse for it.

It is the last week of October. Take a few days off this week. You deserve it.

Alternatively, better get that Halloween costume ready. Nothing is more fun than embarrassing yourself in front of your colleagues.