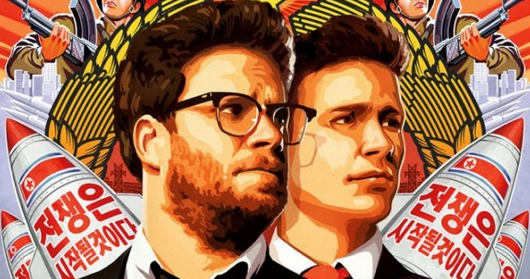 I’m feeling really bad for Sony right now.  They didn’t ask for all of this.  All they did was make a movie about a scum bag dictator in order to score some laughs.  Now, here they sit in a no-win situation.

Let’s recap.  Because of an upcoming movie called The Interview, hackers crack into Sony.  They steal a ton of e-mails and make it public.  Bad PR ensues.  Soon after, the hackers turn into terrorists and start making threats to movie theaters and the patrons who frequent them should The Interview be released.  Movie theater chains refuse to show the movie.  And, finally, Sony decides to pull the plug altogether.

So… am I feeling bad that a juvenile stoner comedy gets the axe?  No.

I feel bad because Sony is caught between a rock and a hard place.  Once the threats of physical harm calm down, they have 2 choices.  First, concede to the terrorists’ demands and cancel the premier of the movie.  Second, give the hackers the finger and continue as planned.

I look at the choices with two lenses.  One is as an American.  This is an affront on the 1st Amendment and freedom of speech.  We shouldn’t cave!  We don’t negotiate with terrorists!

However… I also look at it as an HR person.  While it’s fun and entertaining to see the Sony producer call Angelia Jolie “out of her mind,” the fact remains that a producer just had his email released to the public.

I have been trying to put myself in the shoes of Sony and their leaders.  It seems that much of the country is now calling on them to stand up in the face of terrorism!  Stand up for free speech!  Release the movie; otherwise, we succumb to the thought police of North Korea (and apparently maybe China, Iran or Russia).  This is horrible for Sony.  There is no way to win.

But… I have decided that I think Sony is making the right choice.  Because, at the end of the day, their employees are vulnerable.  We can GASP as the Sony Chairwoman calls Leonardo DiCaprio “Despicable” via email… but what would anyone’s emails look like if random people got their hacker paws on them.  Let he who has not sinned tweet the first condemnation.

Of course it’s embarrassing.  Of course it’s a PR nightmare.  And, yes… I think the hackers have probably won this round. So, now it’s up to Sony to protect their people.  Get off the patriotism high horse.  As a country, we should figure out how to make sure this doesn’t happen in the future.  But, as a company, Sony is doing the right thing.

But, damn… I really wanted to see that movie.