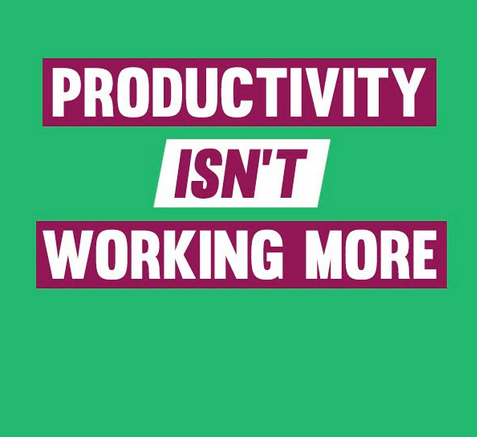 As we wind down 2014 and you as an HR/Talent professional naturally take some time to assess the performance and productivity of the assembled talent in your organization (as well as review your own personal performance), there is one piece of workforce management advice that I would like to give that might seem counter-intuitive. Here it is:

In 2015 you (and the people in your organization) should resolve to work less.

Some backstory that leads us to that recommendation:

For some time now, researchers (as well as many of our own experience and anecdotal evidence), suggest that after some period of work in a day/week, that we begin to actually get less work done for every additional hour of effort. Said differently, the marginal amount of output begins to decline (and pretty rapidly), for every additional hour past about 50 in a week.

This conclusion comes from some recent research from John Pencavel from Stanford who examined output and productivity in World War II-era British munitions factories. Productivity in these factories dropped dramatically for every working hour past 50, and from about 56 working hours to 70 hours there was no discernible difference in total output.

Essentially, every working hour past 56 in a week was simply wasted effort, producing nothing.

So I know what you are thinking about this data. First, you might think that 56 is a lot of weekly hours, and that you and most of your employees are not clocking in that much time each week. Well, the reduced productivity effect starts to kick in much closer to a ‘normal’ work week, at about 49 hours. Now we are getting into whether or not that extra hour or two in a day actually has any value, a nagging thought I am sure you have had at least from time to time in 2014 when you were still at your desk at 6:25PM.

And second, you also might object to the use of 70 year-old data from a munitions factory as not being relevant to what you do—creative, varied, and knowledge-intensive ‘thinking’ type work. The kind of work that can’t be measured in discrete quantities like “number of 40MM shells produced per hour.” That might be a fair objection.

But at the same time, I bet that if you are in the “knowledge” creating game, that your productivity has even less to do with the total number of hours you devote to the effort. You may achieve the equivalent of a day’s or even a week’s worth of “output” in an hour or two of inspiration and creativity. Maybe half a day each week spent sitting under your favorite park bench and just thinking is more valuable than a 13 hour day sitting in your cube.

The bottom line to all of this is that for the most part putting in super high hours at the office—say anything past 55 per week—is almost assuredly a losing strategy if sustained high performance is your goal.

And once you get into the 50-hour of so weekly count, you are in the danger zone for simply getting more frustrated, burned out, and certainly, as this data show, less productive.

If you or your teams have been in a 50+ hours zone then I hope in 2015 you can find some ways to bring that number down. If it didn’t make sense in a World War II munitions factory, (where they needed every bit of production they could get), it probably doesn’t make sense in your marketing services company either.