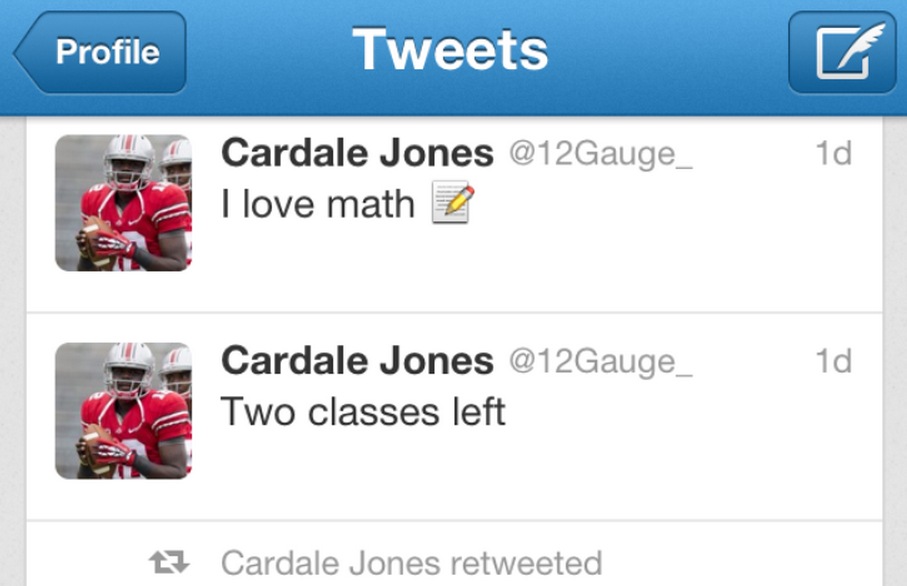 Interview blunders.  We all have the stories.  One of my recent favorites:

Guy candidate who couldn’t hold it any longer went #2 in the urinal vs. waiting for a stall—and then left the bathroom like nothing had happened while passing the guy he was interviewing with—but hadn’t met yet.

Top that one!  Given this post isn’t about bathroom mishaps, let’s focus on how to deliver a championship interview instead.

At 6-foot-5 and 250-pounds, Cardale Jones—back-up to the back-up Ohio State QB—is not a typical redshirt sophomore and MVP of the national championship game. With only 2 games under his belt, he led the Buckeyes to a 42-20 victory in front of millions.  Then, he made a mature decision that shocked many by choosing to stay in school vs. enter the NFL draft.

“After three games, [the NFL] was out of the question,” Jones said.  “A first-round draft pick means nothing to me without my education.”

His performance on and off the field represent what I mean by “poise.” Faced with immense pressure, he kept his cool.  Tempted with making millions, he remained calm and made a rational, long-term decision.

Replicate that aura in an interview and you’re as golden as the championship trophy Jones proudly held.  You do it by coming in prepared, engaging your interviewer in a true dialogue and remaining composed no matter how nervous you may feel.

“It’s unfortunate and a little bit insulting in a lot of ways that whoever loses this game, the word failure comes up as a description of the season,” University of Oregon head coach Mark Helfrich said. “That word never exists in these guys vocabularies.”

Oregon got waxed, yet the players, coaches and fans remained professional.  They had an outstanding season and celebrated the totality of their efforts vs. focusing on one defeat.

You’re not going to get every job you interview for.  And you’re not going to want every offer extended.  The level of professionalism you exhibit in these situations is critical.  How you conduct yourself before, during, and after will set the stage for future opportunities.

“It’s not whether you win or lose, it’s how you play the game.”

Nike dressed Oregon and Ohio State in new uniforms for the championship game. Call me crazy, but I had a hard time understanding why Phil Knight, Nike founder and chairman and Oregon’s biggest booster, would put the ducks in such a dull looking uniform for THIS game.

You’ve got to break out your best for an interview, but also know what fits the culture of the organization.  We coach candidates on attire and grooming.  I don’t care that you wore a Burberry suit if you had nose hair distracting your interviewer!

Polish also takes into account your overall health and attitude.  Do you take care of yourself?  Can you demonstrate the appropriate level of energy as a result?  Are you asking questions that demonstrate a positive, can-do attitude or are your questions trending negative?

Oh, and do your “business” at home before you go out to interview.