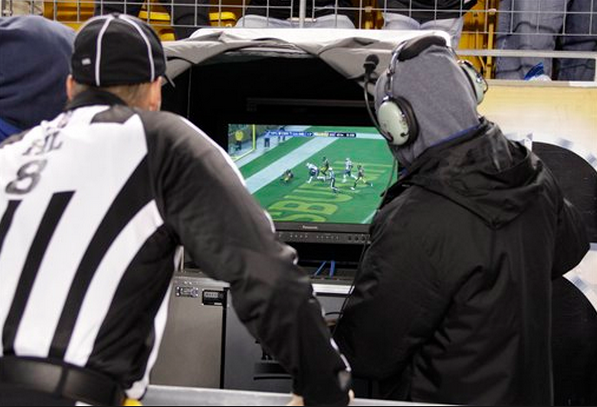 With all due respect to my Detroit friends, this one was worse… fourth down, two yards to go, three minutes left in the game, the Dallas Cowboys face a do-or-die situation. The decision to “go for it” is easy, the decision on “how” is not—this is what makes the NFL great: the time has come for the best athletes in the game to decide the outcome.

Dez Bryant makes a leaping, soaring, amazing catch and stumbles forward trying to reach the goal line for a play that will cement his legacy in Cowboy annals (not to mention the oft-maligned Tony Romo). As he hits the turf, the ball shifts in his grip, but he maintains possession and the ‘Boys are in business.

On the field in Green Bay, officials signal a catch and first down. The Packers have but one recourse— “challenge” the play and hope that a geek in New York City will come to the rescue. Five and a half minutes later, the “instant” replay official overturns the Bryant reception, Green Bay celebrates, and the Cowboys’ season ends. A decision made by someone three feet from the play is overruled by someone 996.5 miles away.

Last week, I wrote about “Left Lane Monitors” in Human Resources impeding progress of others to sate their respective fear of speed. Well, let’s add to our list of metaphors, shall we?

Leadership often sits in the instant replay booth, when they should trust the people on the field to make decisions.

Sitting at your desk today, ask yourself this question: “When I make a decision, how likely am I to be over-turned?” How many levels of approval does it take before “your” answer is the right answer? What if you’re recognized as one of the best in your profession and given a coveted assignment. You prepare, you practice, you place yourself in the right position, and then the moment comes for you to make a decision of importance.

And you nail it. It might not be popular, it may take courage to defy the noise around you, but you make the call you know to be correct.

Forget for a moment that I’m using the Cowboys game as an example. Have you ever had your work compromised by those above you in the chain of command? You’re asked to justify, possible re-justify your thought process; having a decision looked at from 100 different angles to assure perfection by someone who, up to this point, was not involved in the situation.

I know I have… and it blows.

In Human Resources, there’s a particularly deliberate form of decision-making that compromises our ability to act—all in the name of perfection. The irony, of course, is that “perfection” is a fool’s folly. Fearing a mistake is the surest way to handicap innovation, and the quickest was to stunt the development of the people you trust.

The NFL initiated instant replay to remove “human error” from officiating. But it might surprise you to know that about 20% of those plays that are reversed are then found to be incorrect after the fact. You can’t remove the human element from decision-making when humans are involved.

Especially not from 996.5 miles away.