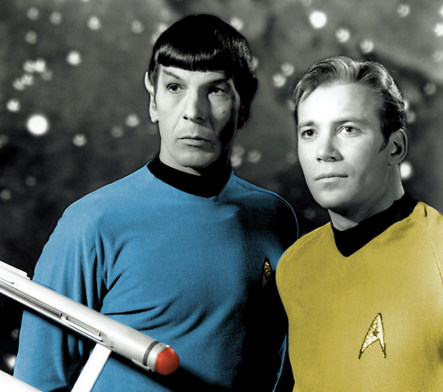 Whatever… I know it’s late.  But my turn wasn’t up yet. Still, despite the late timing, I can’t let my opportunity pass without paying homage to the one and only Leonard Nimoy.

I grew up with Captain Kirk and Mr. Spock—a beautiful 1970s bromance.

Captain Kirk was the epitome of leadership.  He was strong.  He was decisive.  He was good looking.  He got all the girls.  That’s part of leadership, right?

Nobody questions Kirk’s leadership.  In fact, that one time, in Star Trek IV, Starfleet determined that Kirk was such a good leader, that they had to demote him just to put him back in a position where he could lead!  I mean, how awesome is that?  Forget that whole destroying his ship and disobeying orders thing. We’re just gonna put you right back into the Captain’s chair!

Anyway, Kirk was a strong leader, no doubt.  But, it’s quite likely that he wouldn’t be the leader he was if it weren’t for one factor.  That factor, my FOT friends… was Mr. Spock.

Mr. Spock was the logic to Kirk’s passion.  He was the rationality to Kirk’s spontaneity.  The Romulan Ale to Kirk’s Klingon Chech’tluth.

This got me thinking. Who else has a Mr. Spock? What other leaders have a sidekick, a right hand (wo)man on their quest to seek out new life and new civilization. Or, simply their quest to turn a profit.

As far as I can tell… almost everybody has a Mr. Spock.

Only a few things can make a good leader a great leader in the way a strong Mr. Spock can. This is a person to tell you that the choice you’re about to make is illogical. A person who is so trustworthy that you know you can count on him to stand in your place and command your ship. Someone who always was and always will be… your friend.

Like all relationships, of course, you occasionally have to deal with the onset of Pon Farr or something else that could put some very real strain on a normally close relationship. But, these times are rare and rather easy to move past when two are as bonded as Captain Kirk and Mr. Spock.

A leader can’t be a true leader without help. And, the best help comes from those that are trusted. Trusted to tell the truth. Trusted to disagree at times. And, possibly most important, trusted to bust a Vulcan Neck Pinch out on someone if needed.

Mr. Spock taught us how important that #2 is.  Who’s your Mr. Spock?