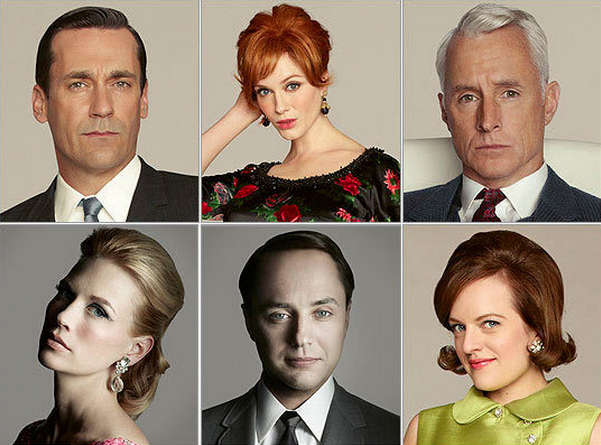 How is it that almost an entire week has passed since the series finale of Mad Men—perhaps the most important workplace-related pop culture phenomenon in the last decade—and no one here at Fistful of Talent has taken on the challenge of recapping the finale through the HR/Talent/Workplace lens?

Well, fear not faithful FOT reader, I am on the case. Let’s take a look at how the groundbreaking series wrapped up, and some of the workplace and career lessons/takeaways we can derive from how the the show’s most important characters ended up. Oh, if you’re not familiar with Mad Men, check out this overview on the show and its characters here.

And one last thing: WARNING, MILD SPOILERS AHEAD…

Don Draper – The series hero, or anti-hero. In the finale, Don ends up in the most unlikeliest of places given his career as a hard-driving, hard-living, boozing advertising executive—on an oceanside cliff, meditating, and chanting Om… Om… Om… . His career, life, and just about all of his relationships are in shambles. He is in a bad spot.

But then, in mid-chant, Don dreams up the idea for what would become one of the most successful and famous ads in modern advertising history: Coca-Cola’s “I’d like to buy the world a Coke” spot. Don then, for the first time in ages, shows us a wry smile. He’s back in the game.

FOT Lesson: There are a bunch, but for me the most important one is that for creative types, you never can be sure how, when, or where inspiration and great ideas will come from, and how to ensure that indeed they will come. Don would not have dreamed up this iconic ad if he was sitting around a conference room back at the office. He needed to have the experience of the retreat, to be in that setting, and to interact with the people there in order to be inspired.

Peggy Olson – Don’s protege, and probably the series’ most sympathetic character, Peggy endures years of highs and lows and corporate maneuvering to end up in a solid place career-wise—firmly established as a high-performing creative in a field that still was not all that welcoming to professional women. She is on her way to the her real goal—becoming a large ad agency’s Creative Director.

FOT Lesson: Talent trumps just about everything else. So if you are talented, you know you are talented; chances are if you can persevere and grind and keep your head just out of the water long enough, your talent can take you where you want to go. It might not be easy or smooth, but in a constantly changing and evolving corporate world, your talent is likely the only thing you can and should count on.

Roger Sterling – Roger, as one of the senior partners of Mad Men’s principal ad agency, Roger played the role of hard-drinking, successful Alpha-male pretty thoroughly over the series’ run. But all that drinking and smoking and conniving came with a cost: Roger had to endure a couple of heart attacks and all kinds of personal relationship turmoil along the way. At the end, Roger arrives in a good place—comfortable in his own skin and ready to embrace the next phase of his life, post-crazy world of the ad agency.

FOT Lesson: No matter how much work matters to you or how much it dominates your life, eventually the work ends and, for most of us, it’s the stuff outside of work that will determine how we feel about life after the work is done. In the Mad Men era of the 1960s, I doubt anyone would have recognized or understood the notion of work-life balance, but in the case of Roger, we see elements of what would eventually become a front-burner issue today. Said differently—keep it in perspective. Most of the people in the world, and many of the people in your life, don’t really care what you do at or for work. They care about you.

Joan Harris – Joan’s career arc was probably the most interesting of all the main Mad Men characters. From office manager to agency partner to entrepreneur in the series finale, we see in Joan the full career cycle that culminates in her becoming the CEO and Founder of her own company, and a likely success in that regard. Joan was able to leverage both her intelligence and her ability to play, expertly, the office’s politics to succeed, when it would have been really easy to crash and burn.

FOT Lesson: Anything, perhaps everything, is possible in your career. But often, as is the case with Joan, getting what you want from your career comes with costs, sometimes pretty significant ones. But if you go into each situation with your eyes open, remain clearly focused on your end game, and, perhaps most importantly, don’t take any BS from anyone, you can get what you want, and reach (and probably exceed), your goals.

Mad Men was a fantastic look at not only life in America in the 1960s, but also about how work, workplaces, and work relationships play such an enormous role in people’s lives. If you were a fan of the show, no doubt you recognized some parallels and truths that even though the show was set in a different era, still have relevance and applicability today.  And if you were not a fan of the show, take the long weekend to binge watch a few seasons and I think you will see what I mean.