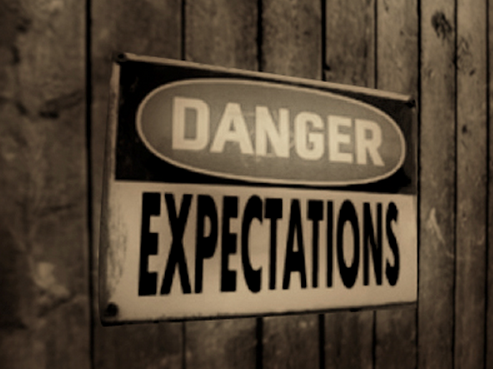 I’ve been known to have been a leader who has really high expectations.  I’m not easily impressed or satisfied.  I’m not saying I’m right… well, I’m usually right, but it’s who I am. This might sound like I would be hard to work for. I also don’t believe that is true. As you can see, my self-insight scores must be off the chart!

Don’t we really only have two kinds of expectations when it comes to most leaders?

These two things usually work together: New leader sets really high expectations, then get’s shot down, feels failure, and tries the opposite route of under-promising and over-delivering.  Or the leader goes all low expectation to begin with and gets their butt handed to them, and they go right ditch, left ditch and come out with expectations so high they’re sure to fail!

What if we didn’t put any expectations on ourselves?

It doesn’t sound like leadership as we know it, does it?

“Tim, you don’t get it, we need to set expectations so these employees will work to meet those expectations.  If we gave them no expectations they wouldn’t do anything.”

This is how my inner dialogue works: I call myself “Tim” because I’ve never really found another name I felt fit better.  What if we gave no expectations, but hired people who were just as passionate about our vision as we were and just let them go do it?  No expectations. Just desire, set free.

Having those just right in-the-middle expectations are next to impossible to do.  So, let’s try none.  No expectations.  As a leader I’m not putting any expectations on you, just do what we hired you to do.  Puts a lot of pressure on hiring decisions, doesn’t it!?  From the moment you become a leader, you are conditioned and trained to not trust those who report to you will do what they’re supposed to do.  You’re trained to set expectations and follow up to ensure they are met.  We don’t even question that this might be doing more harm than good.

This isn’t going to be taught by any leadership coach or told to you in any conference you go to because it’s not sexy.  No one is coming on stage and going, “Hey! Stop setting expectations!” The discipline of hard work, followed by self-correction to get better, will lead to great results.  It’s just a scary concept to accept and believe employees will actually do it.  Trusting that someone will perform—what a strange thing to believe might work.