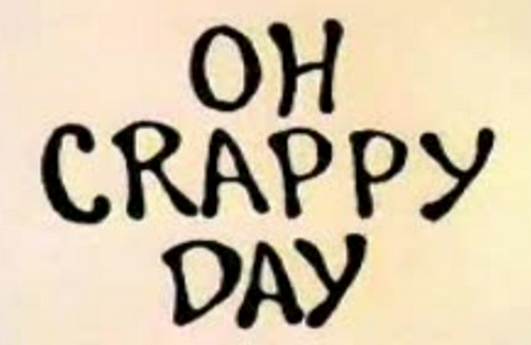 James Harden, arguably one of the top five players in the NBA this season, set a record for the most turnovers in a playoff game.  EVER.  13 terrible, 7th-grade-nightmare-type turnovers like dribbling off your foot with 40 seconds to go in the 4th quarter.

As a result of his really, really crappy day, the Rockets were eliminated by the Warriors.  How will James recover?

We have all had those days where one issue compounds into multiple.  A domino effect you can only helplessly watch happen.  While a natural response would be to go into hiding for a few days, rarely is that the right approach.

I had a really terrible day recently as a result of a live interview.  Nothing that came out of my mouth was coherent or succinct. My mind suddenly was a cloud of cliches and I found myself despising my own words.  It sucked.

Afterwards, I reviewed what went wrong.  This is the start of a recovery.  If you can’t look back and learn from your mistakes, you’ll never grow.  I hadn’t been prepared for the interview.  I’d expected the interviewer to prep me prior with some of his questions, but he didn’t.  Once I realized there wasn’t a prep I should have rescheduled, but I didn’t.

It would have been easy for me to go into a state of turmoil after the botched interview. As I began to replay the conversation, I got more and more down on myself.  I thought about telling the guy he couldn’t run the interview or asking him for a do-over.  I had to mentally get it out of my head.

I challenged myself to focus on other priorities.  This was done.  Time to move on.  I made a list of what I needed to accomplish the rest of the day knowing I’d feel better once I’d gotten something done—and done well.

I also knew I needed to get physical.  I typically workout at the beginning of the day but had missed that particular morning.  I laced up my running shoes at the end of my day and hit the pavement.  I still had a bit of a sick feeling of regret in my stomach, and the run helped me detox.  I felt more relaxed once I’d finished.  Never underestimate the power of a good sweat!

James Harden left the locker room after his terrible game with a book, Death Row Chaplain, under his arm.  Ironically, the book was written by Reverend Earl Smith, the current chaplain for the Golden State Warriors.  The book is about finding hope despite turmoil.

My final recommendation for recovery: Put your crappy day into perspective.  Whether it’s a horrible day on the basketball court in front of millions or an interview that will likely be heard by less than 50 people, it could have been a lot worse.

My mother still loves me.  My family is in great health.  I’m not on death row.

Hit me up in the comments with your best ways to recover from a crappy day!