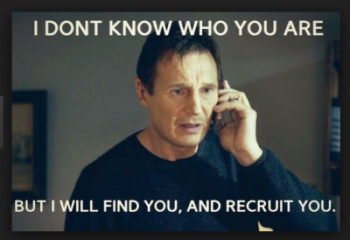 Here is a question for you as an HR/Talent professional: Is there ever any circumstance where it is not okay to cold call into a company or to directly call a “passive” candidate in order to try and recruit him or her away from their company? Is there any reason or development why you would not call in to a specific company or poach an employee of that company?

Off the top of your head, you probably are thinking, “No, not really. I can’t think of any reason why I would not be able to prospect or try to recruit a passive candidate away from their company/job.” After all, that is likely a big part of your recruiting effort—making those calls, building out that network, attending professional events in order to build relationships with the prospects that you hope to turn into candidates… and eventually hires.

In fact, when there is a little bit of turmoil or scandal or even just a little uncertainty going on over at the company of your target, then all is the better. No employee, especially one with a particular set of skills, (sorry Liam) or otherwise in high demand, probably would not want to be the last man or woman to go down with a possibly sinking ship.

So it seems like a little bit of hardship, a little drama, and a little bit of uncertainty in one of your target companies generally equates to good news for you, the Talent pro that has only one thing in mind—getting the best talent possible to sign on with your tribe. Plus recruiting—especially big-time, high-stakes, high-talent recruiting—is a tough game. Playing hard is the only way to play, and certainly the only way to win. Yep, after thinking about it, there really is not much of anything that could dissuade you from hitting your target companies and their talent.

How about the sudden and unexpected death of a target company’s well-respected and loved CEO?

Recall the news of a few weeks back of the shocking death of SurveyMonkey CEO Dave Goldberg who died from injuries sustained in a treadmill accident.

Goldberg, perhaps more famous for being the spouse of Facebook’s Sheryl Sandberg, was almost universally liked and respected, which is rare for Silicon Valley. It was (and is) almost impossible to find anyone who ever had a bad thing to say about him. He was, by all accounts, a really smart, generous, and decent person. And his sudden death has left not only his family and friends reeling, it has also left SurveyMonkey having to negotiate the very difficult and simultaneous processes of mourning and adjustment.

The company had just made some major product and service announcements, was on a slow and steady climb to greater prominence in enterprise technology, and, crucially, had only made the most rudimentary succession plans for their relatively young and respected CEO, Goldberg. So naturally, in the immediate and ongoing aftermath of Goldberg’s death, the company has tons to deal with—succession plans, striking the “right” balance between mourning the loss of their leader and getting on with work, and keeping focused on things other than being sad.

Oh, and one more thing. SurveyMonkey leaders and employees also have to decide what to do with the recruiting calls that have started to pour in. From a recent piece in the NY Times:

And though employees and friends of Mr. Goldberg may have wanted to pause after his death, the rest of Silicon Valley was not waiting. Within days, recruiters for other tech companies were calling employees to see if they were interested in leaving.

“I hate to acknowledge it, but it’s a fact,” said Becky Cantieri, the head of human resources at SurveyMonkey. “We’ve all gotten them,” she said, referring to the calls.

You kinda knew that was where this post was going, right?

Beloved tech company CEO dies unexpectedly, company is in (at least short term) turmoil, and the Silicon Valley tech recruiters swoop in to try and take advantage of the situation.

I am not judging here. I am not even arguing that these recruiters’ behavior is somehow wrong, or out of bounds. I am not in that game, and I am not feeling the pressure to fill jobs that are really, really hard to fill.

I am just asking a question.

Is there ever any circumstance where it is not okay to cold call into a company or to directly call a “passive” candidate in order to try and recruit him or her away from their company?