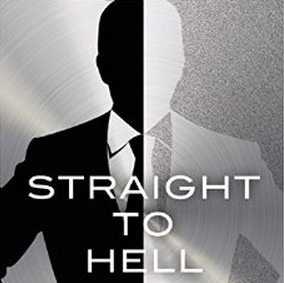 The author, John LeFevre, has enjoyed a distinguished career in international finance (per his Amazon author page). He joined Salomon Brothers as a young graduate and finished his career with Citigroup in New York, London, and Hong Kong.

Bur Lefevre is best known for his work on Twitter, where he started an anonymous account called @gselevator. It’s a collection of overheard comments in the elevators of Goldman Sachs. The account is a parody, much like @hr_said_what, and LeFevre never actually worked for Goldman Sachs. The tweets came from his brain and his alpha-male investment banking friends across the globe.

#1: Some chick asked me what I would do with 10 million bucks. I told her I’d wonder where the rest of my money went.

#3: My 1st wife was vehemently pro-life until my girlfriend got pregnant. #2013Faves

#4: If riding the bus doesn’t incentivize you to improve your station in life, nothing will. — GSElevator (@GSElevator) July 6, 2013

The book is gross. It’s offensive and murky. I felt horrible reading it. I was angry with the sexist, racist and misogynistic stories. But I loved it, too.

And I laughed out loud when HR makes an appearance.

For example, hiring practices at Citigroup were once centralized in New York City. Diversity hiring was abysmal in local markets across Asia compared to North America. Rather than tackle the problem, HR simply decentralized recruiting.

“Want to hire some rich family’s kid? Go for it.”

That weasely HR behavior is right on the money, along with Lefevre’s descriptions of how layoffs are coordinated and performed across Citigroup. You’ll have to read the book. It’s classic HR-amateur-hour stuff that comes out of SHRM 101 guidebooks.

Anyway, I travel around the world and talk to HR professionals about the real world of work, power, politics and money. Nobody listens to me. Naive HR professionals tell me that I’ve got it wrong: attitudes and behaviors have changed, and that the past decade of economic uncertainty has actually disrupted and democratized the workforce. White men don’t have an advantage. Rich families don’t horde wealth. People aren’t hired and compensated based on their race, age, gender or beauty.

Those HR professionals are stupid. They come up with infantile systems and programs to address the aberrant human behavior in most workplaces. They use words like “culture” and “fit” as if they’re something other than codewords for ageism, sexism, discrimination, and bias.

That’s fine. I won’t change their minds about HR.

But maybe some HR leader will read Straight to Hell and see flashes of rampant workplace discrimination and sexism in his own work environment. And maybe this book will prompt some real action.

Or maybe not. Whatever.

But you should still read the book because it’s funny as hell.