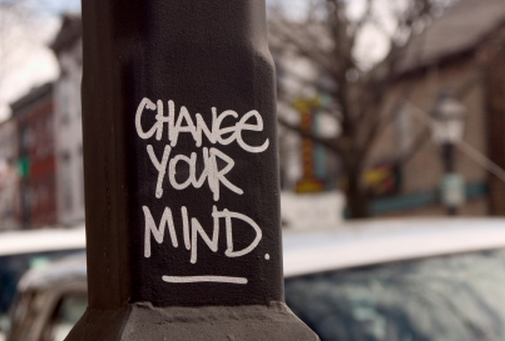 Hopefully by now you’ve warmed up to the notion that productive conflict is important to encourage in your teams. To get the most out of their insights and input, you want to welcome opposition and creative pushback. The days of blindly following our leaders without objection or pressure-testing are behind us. In the knowledge economy, effective leaders encourage opposition to make sure the ultimate ideas are optimized and implementation challenges are mitigated. This is basic stuff—leadership 101 in today’s modern economy. But how do you know if you’re practicing it? Simple—ask yourself this question: How often are you changing your mind? What’s your flip-flop batting average?

Think about it. You change your mind when you’re convinced that someone else’s idea is better. If this never happens to you, you’re committing at least one of two mistakes: 1) you’re surrounding yourself with people who are dumber than you, and/or 2) you’re staying committed to bad ideas even when better ones are presented. Both of these are problems!

But even if you have smarties on your team, you can’t capitalize on their smarts if you’re staying committed to bad ideas even in the face of opposition. You have  to listen with an open mind. You have to have a strong opinion, loosely held. And in holding your opinions loosely, you have to be willing to let them go at times.

There’s no way you’re right all the time. Even a hall of fame major league batter only gets a hit less than 4 out of 10 times at bat. What’s your flip-flop batting average? If you aren’t changing your mind at least 30% of the time, I’d argue that you either aren’t surrounding yourself with sufficient talent who can take your ideas and improve them, and/or are frequently staying committed to garbage ideas in the face of valid opposition.

Work on decreasing your batting average—change your mind a few times. Force yourself to flip-flop at least 30% of the time. It’s likely to encourage your team to think more, encourage more pushback, and make you seem more approachable and interested in hearing from them. That, in turn, should help you create the psychological safety necessary to get the most of their collective ideas.