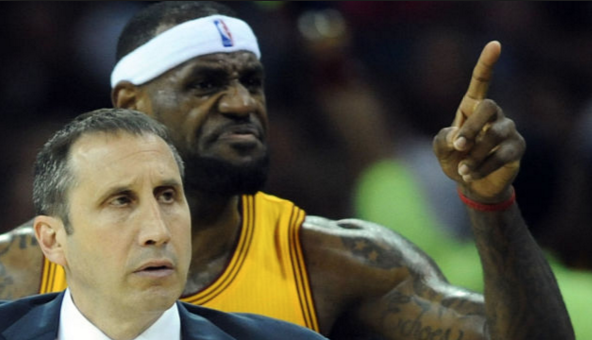 About two weeks or so ago, the NBA’s Cleveland Cavaliers unceremoniously fired their head coach David Blatt. This was despite the team holding the Eastern Conference’s best record (at the time of Blatt’s sacking, the team was a stellar 30-11).

Last year, in Blatt’s first season as head coach the team made it to the NBA finals, eventually losing to the Golden State Warriors—perhaps the best NBA team in the last 15 years—in a competitive six game series. And in that series, Cleveland’s chances were severely compromised by the absence or limited availability due to injury of their second and third best players.

Adding it all up, at the time of his firing, Blatt possessed a won-loss record of 83-40, three playoff series wins, one close loss in the finals to a clearly superior team, and midway through his second year in charge, having the Cavs positioned as the heavy favorite in the East to return to the finals this season.

But after all of that, Blatt was fired. He will (possibly forever) be known as the most successful coach (by winning percentage) to be fired by an NBA club. At the risk of turning this post into one of those silly, “What can we learn about business/talent/life from (insert some unrelated news item from popular culture here)” kinds of pieces, as a huge fan/follower of the NBA, I can’t help but ask, “What can we learn about talent management from David Blatt’s firing?”

Yes, I just went there. I am sorry.

I can think of three pretty important talent lessons from this mess just off the top:

An often repeated maxim about the difference between NBA basketball and college basketball is that the NBA game is all about the players and the college game is dominated by coaches. Said a little differently, the NBA is a talent-driven league. The teams with the best talent almost always win games and championships. Coaching (and management in general) is relatively less important than it is in college ball where coaches have more of a direct influence and impact on the game.

What does that distinction mean for the rest of us? Just that it pays to know where value and competitive advantage is really created in your business. Is it a result of finding and enabling the best talent across the organization? Or is it more of a function of strategy, systems, processes, and execution that have to be driven by superior leaders? And, if like most organizations, success is a little bit due to both, how difficult is it to find and retain talent relative to how hard it is to find the right managers? In the NBA, coaches are easier to find (and replace) than are All-Star level players. And lots of folks think, perhaps rightly, that just about any competent coach can win games given a highly talented squad.

Importantly, Blatt was hired to coach the Cavs in 2014, prior to LeBron James’ decision to return to the Cavs—his first (and hometown) club. Following the announcement of LeBron’s return, the team made other personnel moves, most notably trading rookie and prospect Andrew Wiggins for established star Kevin Love. These moves were designed to assemble a team that could (and would) place the Cavs in title contention immediately. Suddenly, what looked like a coaching job for Blatt that was going to be heavy on instruction, player development of a roster of young players, and a 3-5 year plan to title contention was set on its ear.

After LeBron joins, the Cavs were in a “win-now” mentality—a situation that Blatt would not have envisioned when he accepted the job, and the team ownership would not have asked him about prior to offering the job. Basically, the job fundamentally changed from the time the job offer was made to the time Blatt reported for work. That is usually never a good way to begin any kind of employment relationship.

My all time favorite NBA coach, Jeff Van Gundy, likes to talk about how star players set the tone for everyone else on the team. If the star, like LeBron, works hard on defense, practices hard every day, and respects his teammates and coaches, then that sends out a strong message to the rest of the team about behavior and performance expectations. The other side of that coin is that coaches and leadership also need to hold star players accountable just like they hold average players accountable for performance. It was pretty widely reported that Blatt let LeBron more or less do his own thing both on and off the court, and did not push back forcefully enough when LeBron was out of line or undermined his (Blatt’s) authority as coach.

This eventually led to a more widespread loss of respect for Blatt in the locker room, and the unraveling of cohesion in the team. And, so this theory goes, once the coach/leader is no longer seen as a respected figure of authority there is not much he/she can do to win back that respect. This kind of goes along with point one above. If Blatt knew he was going into a situation where as a new NBA coach he would have to lead the league’s best player (and most forceful personalities) in James, he would have approached the role differently, if not declined to take it altogether.

Plenty to take apart from all this, that is for sure.

I am on record as saying you can learn just about everything you need to know about talent management, leadership, teamwork, recruiting, and life from close observation of the National Basketball Association.

Trust me on this. But not as much as David Blatt trusted the owner of the Cavaliers.