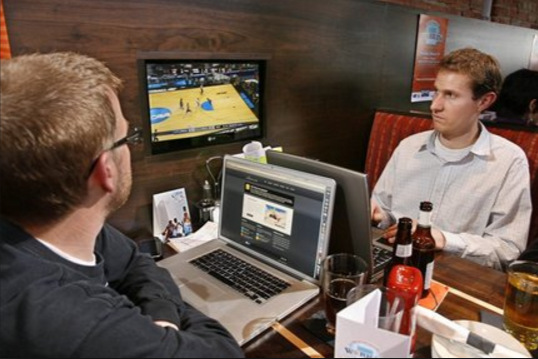 It’s mid-March in the United States. That means the following things:

– Some of your employees are about to get absolutely hammered this Thursday on St. Patrick’s Day. Green dye in the liquid of their choice?  Absolutely no problem. If there’s one thing Americans can do, it’s celebrate days that are centered around other countries. We’re Irish on 3/17. We celebrate Cinco de Mayo (and the birthday of KD) via a large plate of nachos and five Coronas on 5/5. We’re still waiting for Canada to be our best friend by giving us something to center a fake holiday around in America.

– Productivity will also be in the outhouse this Thursday and Friday, as March Madness (college basketball tournament) will be in full effect. If you didn’t buy Buffalo Wild Wings stock in Q4 of 2015, you missed out on the Q1 revenue spike. But I’m sure that Yahoo stock you’re holding onto is going to work out fine.

– OH YEAH, THERE’S THIS: YOUR EMPLOYEES ARE NOW PAST THEIR NEW YEAR’S RESOLUTIONS (those failed) AND ARE CURRENTLY MAILING IT IN FROM A PERFORMANCE PERSPECTIVE.

I’m not saying it’s everyone, but it’s true to a large extent. March and April are the hump days of the annual productivity calendar in America. At the start of the year, we’re coming off a lot of down time. The freshness of the new year keeps us running in January and February.

If you’re an HR pro or a leader who knows what’s up reading this, you have to ask yourself a couple of questions:

– Did we set goals at the start of the year from a performance perspective? If the answer is no, it’s actually OK because you can do goal setting now as a survival mechanism to get your employees to the summer holiday season.  Repeat: If you didn’t set goals, do it now—problem solved. That’s going to wake everyone up a bit.

– How do I get people re-engaged if I already did goal setting earlier in the year? If you already did goal setting, you’ve got a more complex problem on your hands. Your employees are still mailing it in a bit—it’s human nature in the Dog Days of Performance Management in America. Your problem is more complex because you don’t have a formal mechanism like goal setting to bail you out. That leaves the answer to your problem—GULP—being your managers becoming active coaches. #CanIJustDoGoalSettingAgain?

March through Memorial Day in America means your employees are going to float. It’s up to you to do something to bring them back. Choices include:

All those sound fun. But if you want to deal with the dog days of the performance management cycle, you’re going to have to look at the coaching skills of your managers of people.

Can they engage people on performance—good and bad—on the fly? Can they keep your performance initiatives alive until Memorial Day in the States?

If not, you probably need training to help them get better.

Schedule it after you get back from the March Madness blowout at Taco Mac.

FOT Note: This Rant is brought to you by the good folks at Halogen Software who like us enough to be an annual sponsor at FOT for all content in our performance management track (and don’t expect that we run any of this by them ahead of time).