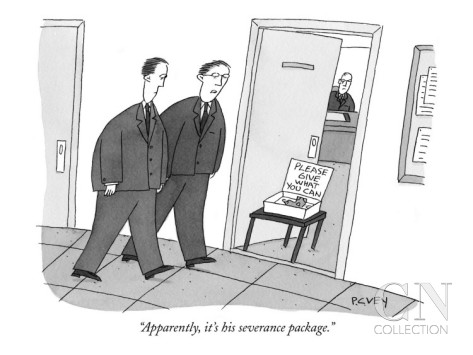 Terminating employees sucks. But everyone has to do it from time to time. One way to soften the blow of an exit notification is the offer of severance. Not only does a severance agreement buy you a commitment from the departing employee not to sue, but it also provides some helpful support to employees as they pursue their next steps. The higher the severance, the more support you’re providing, and so the easier the message becomes. The lower the severance, the more the company saves. So the question becomes: what’s the right amount of severance to offer?

As a rule of thumb, many companies link severance packages to tenure (e.g., 2 weeks of base salary for every year at the company). This has never made sense to me. If one of the major purposes of severance is to support an employee while he looks for his next job, then shouldn’t the amount of severance be linked to how much support he needs? Instead, this tenure-based formula is inverted: those who have been at your company a short time will have a harder time finding their next gig, because they’ll have to explain this pit-stop, yet they’ll get less support.

I think severance packages should be based on factors that include 1) how many chances did the employee have to save his job, 2) how long is it likely to take the employee to find something new, and 3) how much of the employee’s base salary is he likely to need for living expenses. You should have a standard formula to start with. Here’s a suggestion:

Here’s an example: Jake earns $250K and has been given clear performance warnings 2x before his termination as an Accountant. He’d get 12 weeks minus 2 weeks for warnings, minus 2 more weeks for wealth = 8 weeks. In this case, I make no adjustments for the job because Accounting jobs are neither hot nor cold right now. Note that whether Jake’s been here 2 months or 2 years, he’d get 8 weeks of severance. This is your starting point, and then of course you have to adjust upward or downward depending on how badly you need that signature protecting yourself against a lawsuit, and any other particular circumstances of the situation. This strikes me as a better formula than one that is tenure-based. Don’t reward people for sticking around longer in a job that’s a poor fit. Instead, offer severance aimed at helping support people while they find their next steps.