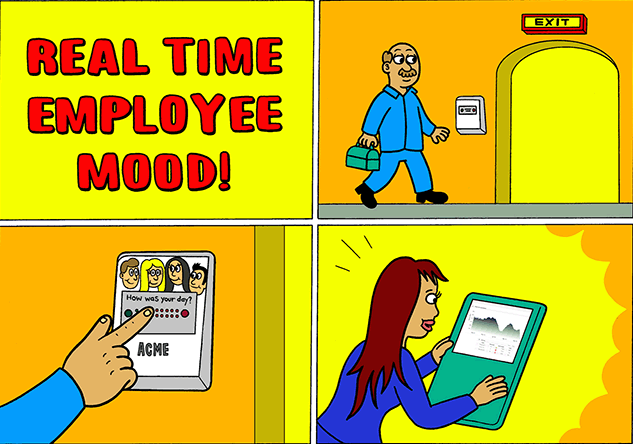 We’re in the midst of a major transition point in how we access and share information about our organizations. And not a small one mind you—this is more like the film-to-digital, flip phone-to-iPhone or CD-to-streaming music type of transition… where once you reach the other side, you ask yourself how you could have ever lived in that old world. When this happens you can be sure that the entrenched technology is going to fight tooth and nail to keep their business, even if the long-term prognosis is grim.

Which brings us to engagement surveys. You know, the time-tested ritual of asking the people in our organizations for information about said organization that in the end we have very little desire to actually do anything with (insert snarky face here).

Technological improvements are already in the process of taking down the engagement survey beast. Why? Well, because the process sucks, but more importantly it’s democratizing access to data. See, in the old days, you would sit with the engagement consultants to discuss the data, prepare your presentation to senior leadership, who would hem and haw about what to share before finally saying “Ok, let’s share some of this data with managers,” who in turn would say “Ah, thanks for sharing, but this data is almost 6 months old—not sure it’s valid anymore.” Game over and tens of thousands of dollars (or maybe more) down the drain.

This process is a thing of the past. There are several technology vendors out there now who specialize in simply and rapidly collecting data from your people about their experience and making that data available in real time. For example, check out Glint, TINY pulse, and BlackbookHR. Sure, most of the technology is cool, the analytics are slick, and your people can’t help but feel better about their experience. But that’s not the major shift… the shift is putting data into the hands of employees and managers in real time so that it can be acted upon. Not held onto and doled about by leadership in a way that makes them feel better about their organization (or themselves).

So here’s the challenge all your organization loving geeks out there: Do you have the guts to make your data on engagement publicly available? Look, I’m not saying it’s going to be easy. It won’t and you can be sure that people (i.e., leadership) will be uncomfortable at times. Like most technological shifts, you can hold out for a while (see my massive CD collection from the 1990s), but eventually you’ll become a relic if you don’t act.