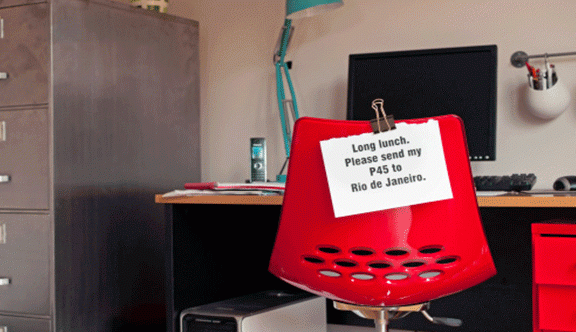 TheLaw.TV had an article recently of the “8 Stupid Moves that Get You Fired.” Two things about this came to mind: 1. What the hell is TheLaw.TV (is it a TV show on the Internet? If so, why the article? Why .TV? NBS, ABC, CBS, FOX, etc. don’t end in .TV) and 2. I’m pretty sure there are more than 8 stupid moves to get fired!

Here are the 8 Stupid Moves from TheLaw.TV:

1. Being late too often.

3. Too many sick days. Yep—you get sick days—but companies don’t like when you use them, we just tell you that you should use them—it’s Jedi-mind-tricks, but HRish.

4. Falsifying time card. My personal favorite is having a “friend” clock out for you later in the day, when you left early. I get to fire both of you!

5.  That’s not on my Job Description. I don’t think this one was real but someone at TheLaw.TV needed some more – I know this is fake because the only thing SHRM has truly taught HR Pros in the last 50 years is that one line on the bottom of every Job Description – I don’t even need to write – You know it! “Other duties…”

6. Drinking on the Job. Before noon.

7.  Sexual Misconduct. 37.8% of people met their spouse at work according to an eHarmony totally legit survey. In that same survey, but unpublished, were how many people found their “next” spouse at work—at a slightly higher rate of 92.8%.

Solid list, but remember the title was “Stupid”—I think they missed a few—here are the missed ones:

9. Cooking fish in the break room microwave.  (That’s like terrorist bad! You know who you are!)

10. Smoking pot in your car at lunch when I can see you from my office window. “Hi—me waving—I can see you!”

11.  Wearing white socks with black or brown dress shoes. I haven’t fired anyone for this, but I’ve come close.

12.  Fighting with the boss over some stupid idea you won’t let go of. But really, we should change up everything we do and become a charity because 50 years of running a profitable company is enough.

13. Taking credit for crap you didn’t do, but people who report to you did. I would actually go with hanging over firing on this one.

14.  Asking for a salary increase after you just got your butt handed to you in your performance review. Gutsy, but stupid.

15.  Listening to really weird Pandora/Spotify mixes at the office in an attempt to look cool. I have to admit I did this back in the day—last year—but it was rap because I wanted to look black, not cool.

16. Being “way” into anything in an over-the-top way. Think Transmeta-physical yoga ultra-marathoner—I only eat dirt and I’m obsessed with Pokemon. Come on, you’re fired.

Okay—give me your Stupid Move that will definitely get someone fired! Hit me in the comments.