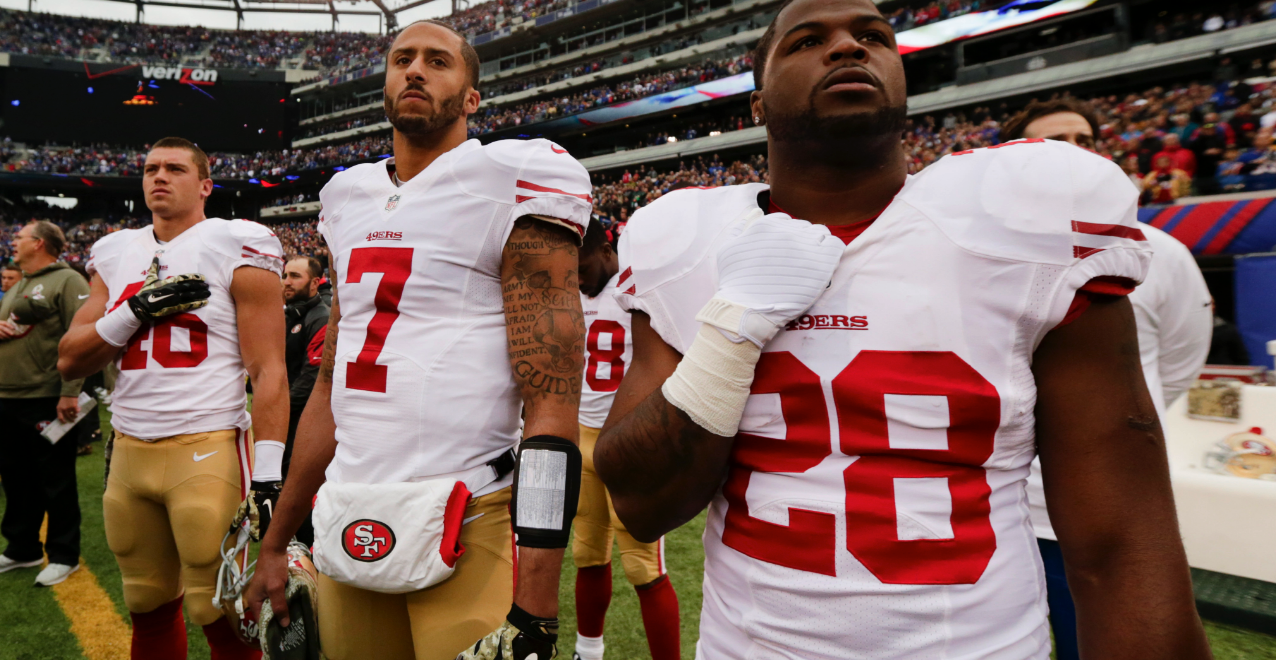 Have you heard about Colin Kaepernick?  Of course, you have.  Kaepernick is the San Francisco 49er quarterback who refused to stand for the national anthem to protest what he feels is racial injustice in America.

I’m not here to wag the finger at Kaepernick.  One of the things that makes this the greatest country in the world is the fact that anyone can take a stand on an issue important to them – that freedom is a given.

What happens next, though – that deserves some analysis:

The reality?  People take stands in the workplace of ideas and the public votes, and the institutions that are pressured by public opinion and economics make moves as a result.  Just ask the Dixie Chicks, who are probably as far removed from the topic of racial injustice as you can be:

On March 10, 2003, during a London concert, nine days before the March 19, 2003 invasion of Iraq, lead vocalist Natalie Maines told the audience: “We don’t want this war, this violence, and we’re ashamed that the President of the United States (George W. Bush) is from Texas”. The positive reaction to this statement from the British audience contrasted with the negative reaction including boycotts that ensued in the US, and their albums were discarded in public protest and pulled from the radio.

The point?  We’ve got a lot of rights in this country, and people protesting on principle end up being impacted by the marketplace in interesting ways.

Let’s flip this around to the workplace.  Disruption by a single teammate can happen in a variety of ways.  Here’s one example that happens occasionally at companies like yours in the American workplace, just like anthem boycotts and the Dixie Chicks talking smack about American policy in front of a foreign audience about a nation getting ready to go to war.

A professional worker in Cleveland refuses to work for a difficult client, citing the fact that the client is belligerent, borderline abusive and she’s tired of it.  She’s not going to work for the client, one that represents 60% of the small company’s revenue.

Let’s say that employee is also talented. Hopefully we can redeploy her in other ways.  But her refusal to work on the company’s most important account causes resentment – teammates now have to pick up the slack and work harder and put up with a client who, by all accounts, sucks.

But she took a stand.  She’s not going to work for the client. You know she has that right, but that doesn’t change the reality that her teammates are pissed and, by the way, you don’t have enough work for her not to be part of the team that supports this client.

Resentful teammates. Economic realities. These are the hidden costs of employees who take stands. And the people in charge at organizations where employees take stands have to make tough choices across time.

Long live the right for any American to take a stand for something they believe in.  Just don’t automatically assume that disagreement with the stand means that someone’s a racist, a war monger, or in the case of my workplace example – someone who endorses people acting like belligerent fools.