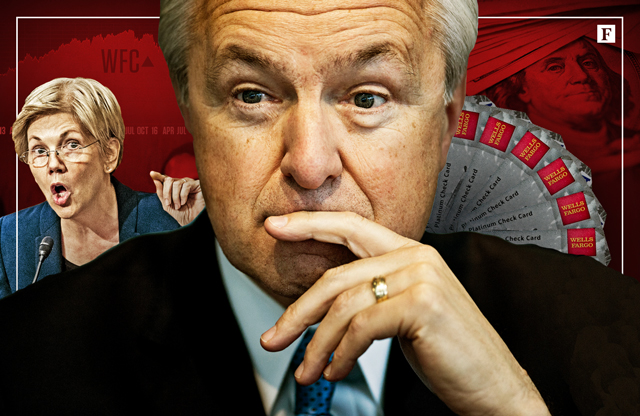 “If there is one job that I as CEO must do for our team members, customers, communities, and shareholders, it is to be the keeper of our company’s culture. It is the role of all team members to understand our culture, internalize it, live it, teach it, and reinforce it.” — CEO John Stumpf, from Wells Fargo‘s statement of values

If workplace culture is really so incredibly important at Wells Fargo, as its CEO has said on so many occasions, then how do you explain the company’s complete and total culture meltdown?

It’s actually pretty simple. In far too many cases — and Wells Fargo is now the poster child for this — an organization’s professed “values” are simply empty platitudes that don’t reflect how a company’s really acts day-to-day.

That’s why I wasn’t surprised when I heard about the recent scandal at Wells Fargo, where 5,300 mid and low level employees got summarily fired for doing something that was clearly wrong but demanded by company executives. Wells Fargo paid out a whopping $185 million in fines as a result.

A complete disconnect on values

The problem was that bank employees were pushed to sell products and services to customers whether they wanted them or not, in violation of the company’s stated values, and often this meant opening up accounts and issuing credit cards without customers knowing about it.

And to add insult to injury, even employees who called the company’s ethics hotline that was set up to report issues just like this one were fired for doing so.

Yes, Wells Fargo’s stated company values are 180 degrees opposite of what employees were actually told to do.

If you look at Wells Fargo’s statement of values, it all sounds pretty good:

Our values should guide every conversation, decision, and interaction. Our values should anchor every product and service we provide and every channel we operate. If we can’t link what we do to one of our values, we should ask ourselves why we’re doing it. It’s that simple.

All team members should know our values so well that if our policy manuals didn’t exist, we would still make decisions based on our common understanding of our culture and what we stand for. Corporate America is littered with the debris of companies that crafted lofty values on paper but, when put to the test, failed to live by them. We believe in values lived, not phrases memorized. If we had to choose, we’d rather have a team member who lives by our values than one who just memorizes them.

We have five primary values that are based on our vision and provide the foundation for everything we do:

Those values sound good, but in the case of Wells Fargo, they were total BS.

Forced to “drink the Kool-Aid”

Here’s what one Wells Fargo employee told the Minneapolis Star-Tribune:

Chief Executive John Stumpf said in Senate testimony … that “we never directed nor wanted our employees … to provide products and services to customers they did not want or need.”

Bank tellers who did not refer enough customers to bankers intent on opening new savings or checking accounts would be cajoled and threatened and written up for failure to meet their quotas, former employees say. The reward for meeting the sales targets?

Joyce Gill managed the Wells Fargo at Nicollet Avenue and 31st Street (in Minneapolis) from 2002 to 2011, and said the pressure to make sales ramped up during the latter half of her years at the branch. In all, she spent 20 years with the firm but left, she says, because she couldn’t in good conscience push her employees and customers as hard as managers wanted. “I drank the Kool-Aid for a while, but it just became ridiculous,” she said.”

Putting employees in a no-win situation

I have worked under a corporate culture like the one at Wells Fargo, where employees were put in a no-win position when the organization’s professed values were wildly different from the day-to-day workplace reality employees had to deal with.

In my case, it was about the issue of “comp time” — giving employees additional time off in lieu of overtime. Comp time was forbidden under company policy, even if employees requested it, and we were told that workers were only to be compensated for additional work with overtime pay. And, we were told that a senior manager at a unit in a Southern state had been “separated from the company” for his failure to follow this policy.

It was a not-so-subtle hint: This could happen to you!

It sounds like a straightforward problem with an easy solution — just pay the OT — except for one little wrinkle: the company didn’t believe in realistic budgeting for overtime. At budget time, OT budgets were routinely whacked to get them down to whatever corporate thought they ought to be at. What little overtime that was in the budget wasn’t nearly enough to deal with our ongoing OT needs.

So, as a mid-level manager I was faced with this dilemma: If I need someone to work overtime, do I pay them for it and then take a beating for going over budget, or, do I cut a deal with them to take comp time (which many employees would gladly agree to), keep the overtime budget in shape, but put myself at risk of getting fired for violating the “no comp time” rule?

This might not be Sophie’s Choice, but it’s in the same ballpark because the corporate edict, one that they knew was unworkable, put good managers in a bad position where they couldn’t win no matter how hard they tried.

What kind of a culture does that to its employees? Well, now we know what kind — the kind they had at Wells Fargo.

BS from the top

Over the years, I’ve heard lots of managers talk about similar situations like this, and I have heard so many that I know it is not just an aberration by bad players like Wells Fargo. My instincts tell me that this goes on far more than we care to admit.

It speaks to a broken culture, one where the high-sounding statements of mission and values don’t jibe with the day-to-day reality of the workplace. When that happens, you are left with cynical, broken employees, and the culture you’re left with is one like the one at Wells Fargo.

In the end, it’s simply fodder for business school case studies on how NOT to build a strong company culture, and a good example of what happens when the high-sounding platitudes that business executives preach are at odds with the reality of what employees are pressured to do.

In other words, the BS from the top simply rolls downhill — and it’s the mid and low-level employees who suffer in the end. As one United States Senator noted, it is the definition of “gutless leadership.”

Have you returned one nickel of the money that you earned while this scandal was going on?” asked Sen. Elizabeth Warren, Democrat of Massachusetts. “Have you fired any senior management, the people who actually oversaw this fraud?”

Ms. Warren added: “Your definition of accountability is to push this on your low-level employees. This is gutless leadership.”