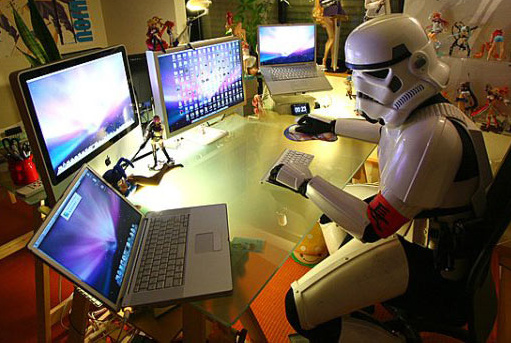 Stack Overflow recently released the results from their annual Developer Survey and this year over 56,000 Developers from 173 countries answered questions about the tech they love, the tech they hate and dozens of other questions that will help you understand them better and recruit them to your organization! Stack Overflow is the largest online community for programmers in the world.

Here are the highlights from the survey:

– 9.8% of respondents self-identified as “Ninjas”, and 7.4% self-identified at “Rockstars”. So, it would seem like “Rockstars” as a title is losing its luster, whereas “Ninjas” is still wanted. For the record, the majority still prefer: Developer, Programmer, and Engineer. Stop being cute with your titles!

– Star Wars beat out Star Trek for everyone under 50. Sorry Trekkies, you’re old and played out. Long live the Republic!

– 92.8% of the study were men and 5.8% were women. That’s right, math geniuses, that doesn’t equal 100%. They’re Developers, not mathematicians! Also, if you’re trying to hire women Developers, good luck and get ready to overpay for that talent. Also, women are more likely to be Designers than any other Developer type.

– 73% of Developers believe that Diversity is important in the workplace, which is ironic coming from mostly white males! I can only assume that “diversity” to them means bringing in people that like all the Star Wars episodes, even the crappy ones with Jar Jar Binks.

– 69.1% of Developers are self-taught and 25.5% (1 in 4) actually got their Developer education through online courses. Like the ones being offered up at Udacity! The sponsor of this blog post!

– Mac OS X is the single operating system of choice of Developers for the first time since Stack started doing this survey four years ago. But all Windows platform’s: 7, 8, 10, XP and Vista combined still far outperform Mac.

– The #1 source of hire for developers is Referral by a Friend. 10% of Developers find their own jobs by directly contacting specific companies they desire to work for.

– Money still kicks ass when it comes to reasons why a Developer will take a job with 62.7% rating salary as the #1 driver for their decision. The other drivers are: Work-life Balance (50.4%), Company Culture (41.8%) and Quality of Co-workers (39.9%) respectively. What doesn’t have much impact? Job Titles and Equity!

What I honestly find when talking to executives is this is an HR issue! HR wants to work remote so they try and make this an ‘organizational’ issue of all or none, instead of a critical talent issue of what do we need to do to find the best talent!

Need new pools of IT talent? Udacity is turning IT recruiting on its head by delivering great pools of talent that curious, value professional development and come with experience to give you the diverse perspectives you need. Check out Udacity’s Talent Source today to find some of the top Nano-degreed IT professionals on the market. Udacity is a proud sponsor of Fistful of Talent.