Clowns. It’s probably been a long time since you gave clowns a second thought. But now, with the Presidential election and headlines like this from my neck of the woods – “Creepy details released in South Carolina clown sightings”– you probably are thinking about clowns more often. BTW – best line from the clown article link is this:

“They told the station they saw the clowns drive away in a dark-colored car. It is not clear how many clowns were inside the vehicle.” (Emphasis mine.) 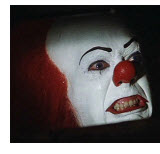 Not sure if that was done on purpose or not but it is hilarious either way.

I grew up with Bozo and Ronald. Then there was Krusty and Pennywise. The latter changed everything for me. That image of Pennywise glaring up from the curb through the sewer still makes me go out of my way to walk around those openings. I’m not debilitated by it – no coulrophoia for me. But let’s face it. For many, clowns are creepy. And creepy isn’t good.

And your HRTech is creepy. Or can be.

Design HRTech to Be Less Creepy

I just got back from HRTech. Held in Chicago last week, HRTech is Mecca for those that seek to mechanize, engagement-ize, happy-ize and recruite-ize employee and talent touch points. Just adding the word touchpoints to a post starting with a discussion about clowns is creepy BTW. But the conference, as usual, was great. The vendor floor was filled with the old standbys ADP, CareerBuilder, Cornerstone, IBM, Oracle, and newbies filling up the startup pavilion like The Chemistry Group, Bonusly, sixQ Software. If you wanted to talk software and HRTech you would have no problem finding someone to have that conversation.

One of the more prominent topics seemed to be about machine learning (ML), artificial intelligence (AI) and natural language processing. In other words, talking about how software will be talking and listening. Everyone seemed to be trying to turn your devices into human beings – or at least pretty close facsimiles of them. The HRTech Hacklab had an app that used mobile tech and natural language processing to access company databases and find info for you. Some software used your device’s ability to know where you are and who you interact with most often to surface better answers to your questions.

And that sounds cool on the surface. But… (always a but.)

So you creep yeah, ’cause employees doesn’t know what you do…

But all that talk about software that “talks and listens” at HRTech reminds me of something we call “The Creepiness Factor” at my company. As we develop software ideas we run them through the “creepiness” meter. Meaning – we ask ourselves – and others – does it creep you out that a company would know this information about you? And if it does – how would we mitigate the creepiness or give the user more control over the creepiness.

Sometimes there is no way to fix the creepy and you have to walk away from the feature. While you as a company may want the data, you have to respect your employee’s needs and opinions. Do you think your employees want you to know they support the Green Party? Or Trump? Or Clinton (man, I don’t need comments either way on that split!) Or maybe you think it would be really cool to have your HR app to serve up possible physicians in the network based on the employees GPS location on their company phone. Sure – you have that right and some may say it’s an employee’s responsibility to know when and how to use the app, but so many people auto click “accept” on mobile apps just like they do with every end-user agreement on downloaded software.

The problem is that knowing your employees don’t read and understand a lot of what apps can access means you need to be the one to put yourself in their shoes. You need to have a conscious.

Ask yourself – “Would this creep me out?”

If you’re working with your tech provider, make sure you have your own Creepiness Meter established. Too much creep and employees won’t engage. That’s just money down the drain. If the data you need can only be accessed and gathered by being creepy – rethink what you’re doing. Maybe there is a way to get the data voluntarily vs. through an app in the background, opaquely.

Remember – most clowns are really only creepy at night. Make sure your app is transparent and employees know and approve of what you’re asking of them in your app. If you do that you can keep Pennywise at bay. And that is a good thing!