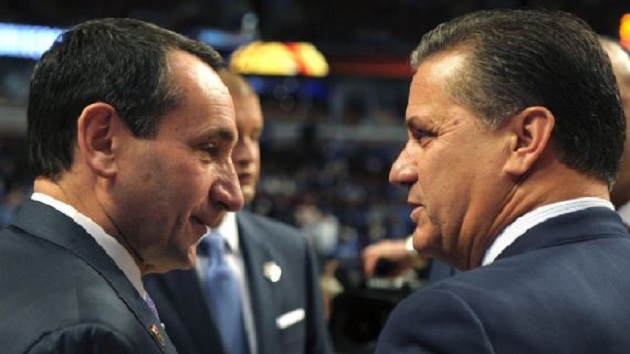 You think this is going to be a sports post. Trust me, it’s more about you than it is about sports.

Read enough sports news and a familiar theme emerges.  Coach (Krzyzewski) does it the right way and Calipari is a mercenary.  But a closer look suggests it’s not that simple.

This post is more about Coach K’s view of talent – using Calipari as a point of contrast.  My question about which talent strategy is better was really provoked in 2015, when Duke found themselves with 8 players available to play, a rundown of which occurs below:

“Duke is down to eight scholarship basketball players this season. There are two walk-ons, but neither has played a second in a competitive situation (and is not likely to this season). Coach K also has a promising big man sitting out as a transfer, but while Sean Obi can help in practice, he’s not available for games.

So that’s it – eight players … and four of them are freshmen.”

My thought at the time – How does that happen to a blue blood program like Duke?

Easy – Coach K doesn’t like to rely on numbers.  He makes decisions about what players will provide the best total team performance and then plays those players a lot of minutes.  Anyone who didn’t make the cut? They’re on the outside looking in, which means Coach K and Duke are seeing a higher than normal transfer rate.  It’s been this way for awhile. The minutes chart over the last few years courtesy of The Ringer:

Need a contrast? Instead of relying on 6-7 players exclusively, John Calipari of Kentucky has become such a good recruiter that he’s routinely used a substitution pattern that includes two teams – replacing the five players on the floor with five completely new/fresh players.

Coach K, it should be noted, is just as good of a recruiter as Calipari – or at least very close.  Here’s who’s currently on his roster and where they fell coming out of high school in the top 100 players nationally: 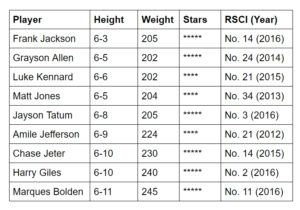 That roster? Gold, and an easy argument could be made that it’s as good or better than Calipari’s.  But if Krzyzewski continues his preference of playing 6-7 players heavy minutes and leaving others cold on the bench, it could have the following ramifications that we’ve already seen numerous times in the past:

But more importantly, college basketball is dominated by the “one and done” player, where the top college players are forced to play college basketball for one year before declaring for the pro league (NBA) draft (a by product of the collective bargaining agreement between the NBA and it’s player’s union).

The one and done scenario is tricky for Coach K, as almost all of his players came into his program thinking they might be able to declare for the draft after one year.  But players in the chart above like Grayson Allen, Luke Kennard, Matt Jones and Amile Jefferson have opted to stay longer and are performing at a very high level this year. That means if Coach K plays those four and then plays 3 of the remaining 5 high-end recruits, two elite prospects are on the outside looking in.

Calipari? He’s playing 10 at a time. Krzyzewski has changed with the times and is now an elite recruiter of the “one and done” player (or at least those who think they might fit that description), but let’s face the following fact:

Krzyzewski’s standard to play fewer players presents an opportunity for others, including Calipari, to negatively recruit against him.

“Go to Duke and it’s 50/50 whether you get meaningful minutes as a freshman. You’re a top 20 player in the country.  Why would you take that risk?  Come to Kentucky and that risk goes away, as do all the doubts of NBA scouts and executives.”

At the end of the day, Krzyzewski’s preference to play fewer players is a performance management/leadership preference, also tied to development of talent.

Are you a manager that relies on a few key people?  Or are you someone that tries to develop a bigger number of key employees?

No one can argue with the Coach K results, and Krzyzewski has reinvented himself numerous times. The argument could be made that his final reinvention before retirement will be related to expanding his rotation and relying on ALL the talent he has without leaving great people on the outside looking in.

FOT Note: This rant is brought to you by the good folks at Halogen Software who like us enough to be an annual sponsor at FOT for all content in our performance management track (and don’t expect that we run any of this by them ahead of time). Jonesin’ for more than just a cheat sheet? Download Halogen’s FREE Performance Review Survival Kit here.