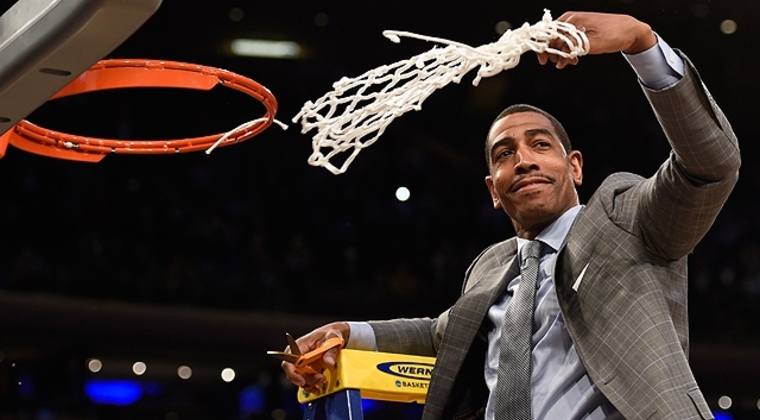 I’m starting this post with an animated GIF below.  Email subscribers need to click through to see it.  Do that now if you need to, because this post is based off the visual, and it’s worth it.

Watch the GIF as it loops over and over. It’s from 2014 in the NCAA Men’s Basketball Tournament, with Connecticut coach Kevin Ollie turning from an after game interview, seeing his team behind him and giving a playful slap with at least some level of intensity to a Freshman on his team who was screwing around on camera as Ollie was being interviewed during the Huskies’ run to the National Championship as a #7 seed in 2014.

Watch it closely.  It’s classic.  Then watch the reaction of the team.

Some people were horrified by it.  To me, it underscores a component of leadership mixed with results/success that is the following reality:

Succeed at a high level and you can lead whatever way you want to lead.  Not because you’re above the law (although you are), but because you probably got that way with a leadership style your team understands and values. If any action is consistent with that style, you’re probably good to go.

It doesn’t matter that the player got a slap on national TV.  Ollie was and still is the leader.  The team reaction says it all.  “Oh no, he didn’t…” They know Ollie.  The team’s just succeeded on the biggest stage. It’s no doubt in line with the behavior they see from Ollie on a daily basis. It’s expected, and at the moment of their greatest success with this leader, it’s embraced.

Results trump whatever we define as acceptable behavior.  Maybe some year Kevin Ollie will be struggling and will do something with poor judgment to a player and he’ll pay a price.  Actually, the clock is already ticking – the Huskies went 16-17 this year, missing the lowly NIT as well as the NCAA.  In a world that’s very much “what have you done for me lately”, Ollie won’t lose his job by treating players with the authority and connection shown in the above GIF, he’ll lose his job by not winning enough games.

You think that was over the line?  You couldn’t touch Kevin Ollie right then for that.  But at 16-17 in 2017, all it takes is one player complaint and the investigations will roll.

The leaders who succeed on the biggest stage can do what they want for the most part.  Until the success isn’t there, at which point we’ll treat them different.