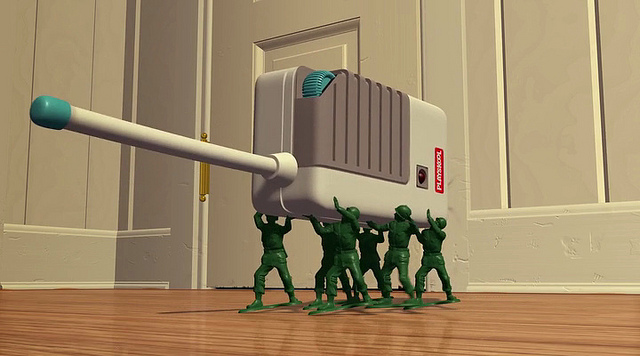 As my kids were growing up, I bet I watched the original Toy Story, where Woody first meets Buzz Lightyear….oh, about 653 times. Given other brutal options like Caillou or Barney, Toy Story felt like a great choice. Our son’s favorite scene was when the toy soldiers scream, “Red Alert, Red Alert” over the walkie talkie to warn the other toys of danger. My son walked around the house for weeks, screaming “Red Alert, Red Alert” every time we ran out of cookies or he had to take a bath.

I thought of that quote last week when an HR friend relayed to me a great story from one of his managers. Check my take after the story.

A senior executive team was meeting to discuss an underperforming team. The senior manager, who recently took over the team, told the story of what he had discovered: “Look, here’s the deal. In one group, I have Bobby, a brand new inexperienced employee, reporting into Sally, who’s a weak manager who doesn’t develop people well, who reports into Tom, who is disengaged in his current role and provides little direction. Lastly, they report into a division president who hired or promoted all of them into their roles, but claims he has a ‘nose for talent.’ One on top of the other, on top of the other. When you lay them out, that’s one bad stack of pancakes we made for ourselves.”

Um, for the record, “bad stack of pancakes” is my new favorite phrase….and it screams “Red Alert!” just like the Toy Story soldiers. Think about some of the worst performing teams you have encountered, and I bet you had bad stacks of pancakes all over the place.

If you’re a talent pro, responsible for addressing underperformance, you might start by breaking down organizational structures and charts by performance. We all know that average players hire and promote average players. They’re also scared of ever having a top performer anywhere near them.  Performance in these groups will never change until structure or people changes happen.

Look for the “stacks” of average.  The result will be predictable. In cases like this, the stack of pancakes just gets bigger and bigger. Red Alert, indeed.