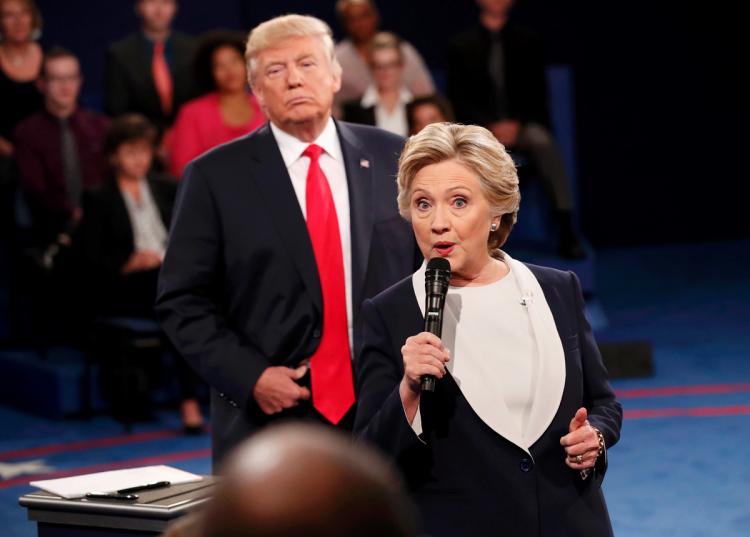 And jerks who try to bully you.

Jerks who try to bully you come in a lot of flavors in the workplace.  Some are obvious (they’re direct, maybe even profane) and some are less obvious (you have to watch body language, backchannel communications and more).

Workplaces also come in a lot of flavors.  One workplace where you find a lot of bullying behavior is politics.

With that mind, let’s do some color commentary on two allegations of bullying behavior in the political workplace – specifically presidential debates – and grade the reactions of our ruling class as they deal with alleged misogynists, people who claim to have invented sh*t like the Internet, and more:

In case you missed it, excerpts are out from Clinton’s upcoming book, “What Happened”, where she felt uncomfortable with the proximity of Trump in one of the presidential debates:

“In the passage from Clinton’s memoir, “What Happened,” the former secretary of state recounts an “incredibly uncomfortable” moment during the second presidential debate in St. Louis on October 9, in which her “skin crawled” as Trump was “looming behind” her and “literally breathing down [her] neck.” A day prior, the Washington Post had released a video from 2005 of Trump making lewd comments about sexually assaulting women.

“Well, what would you do? Do you stay calm, keep smiling and carry on, as if he weren’t repeatedly invading your space?” asks Clinton in the book. “Or do you turn, look him in the eye, and say loudly and clearly: ‘Back up you creep, get away from me. I know you love to intimidate women, but you can’t intimidate me, so back up.'”

Here’s a picture of the space invader: 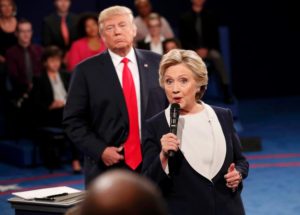 Let’s grade this bully scenario (1 to 10 related to intensity and quality of response/outcome):

–Bullying Activity – 5 on the intensity scale. Trump’s back there, other angles say at about 8-10 feet.

—Creepy Factor – Rating of 5.  Not so much for this act, but you have to take it to that level simply because of all the baggage Trump brings to the table.

–Response to Bullying Activity – Rating of 5.  Have to rate it down the middle, because if Clinton would have called him a creep and made references to his treatment of women, it might have moved some moderate female votes.  On the other side, playing through it and performing is always a good idea.

–How History Will Remember the Response to the Bully – Rating of 2. People won’t remember it much because there was no response at the time.  They’ll remember it a bit due to the book.

The year is 2000 and George W vs Gore debates give us this gem (From Time Magazine’s Top 10 Debate Moments):

Sometimes a candidate says it worst when he says nothing at all. Al Gore’s endless sighing during the 2000 debate against George W. Bush sparked endless mockery, as did his decision to leave the podium and come within inches of Bush during a response. Four years later, debate organizers would amend the event’s rules to avoid such an episode, stipulating: “Each candidate may move about in a predesignated area.”

Here’s video of how Gore tried to punk Bush and what he got for his trouble:

Let’s grade this bully scenario (1 to 10 related to intensity and quality of response/outcome):

–Bullying Activity – 7 on the intensity scale. No one would ever call Gore a bully, but he’s kind of an intellectual bully.  W’s trying to make a point, and here comes the president of the honor society to flex his ACT.  Space invaded takes it a 7 at least.  Worldwide TV, trying to throw someone he considers an intellectual midget off his game.

–Creepy Factor – Rating of 4.  Gore’s not much of creep, unless you think intellectual superiority is creepy.

–Response to Bullying Activity – Rating of 9.  Bush didn’t know it was coming, and here we go.  He pauses, turns only his head and gives him a “hey freak, we’ll be right with you” head nod.  Laughter from the crowd ensues.  Winner/Winner/Chicken Dinner.  Bully gets embarrassed.  Best possible ending.

–How History Will Remember the Response to the Bully – Rating of 9. The crowd laughs. Gore looks like something worse than a bully, he looks like a fool, trying to save face by blurting out (and I’m not making this up) “What about the Dingell-Norwood Bill?“

Hell, I don’t know Al – what about the Dingell-Norwood Bill?

I think the moral of this analysis is this.  The higher the stakes, the more you have to be prepared to deal with bullies.  Clinton had the skills to do something similar to Trump, but she choose not to.