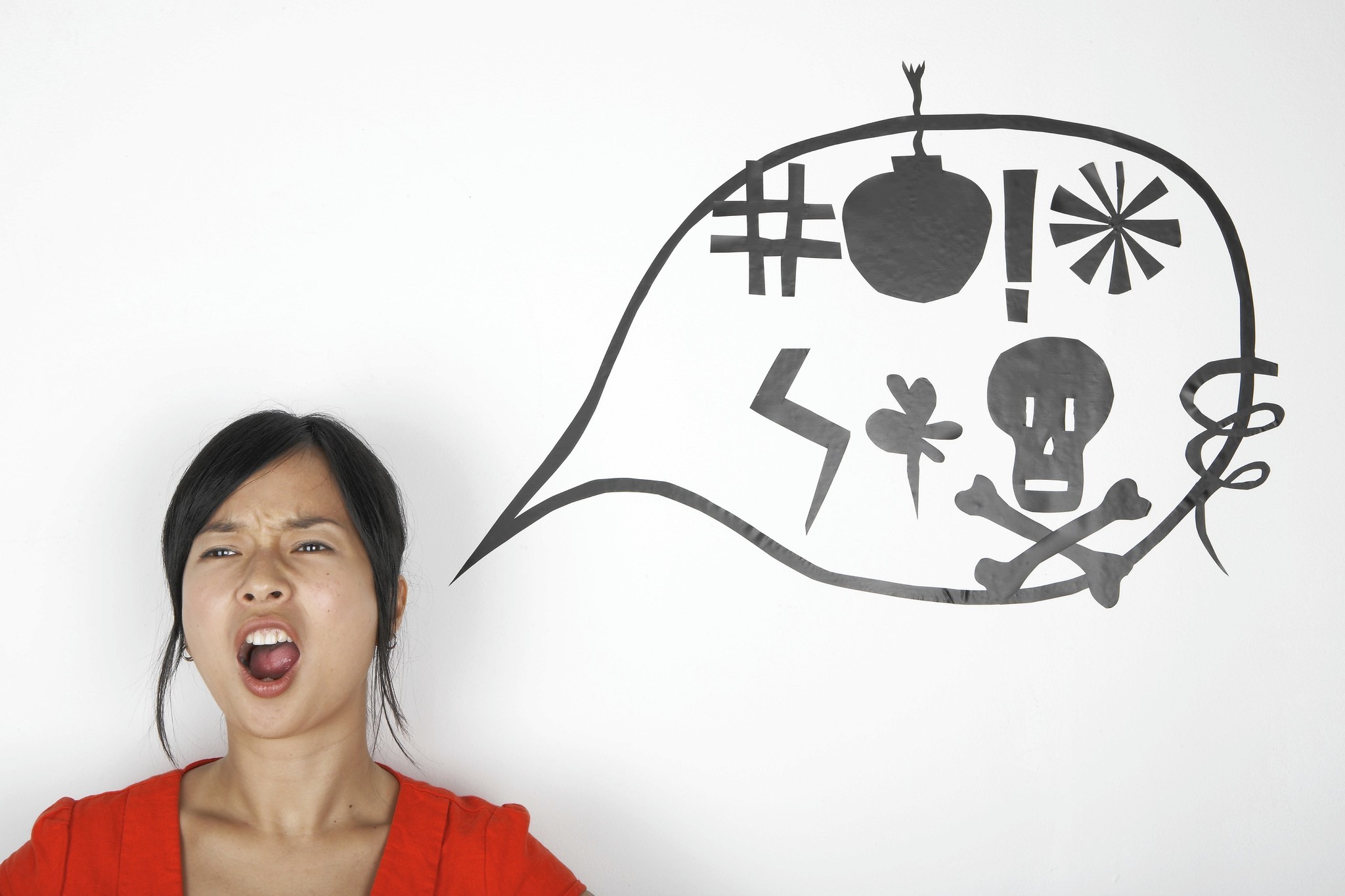 Last September, Fast Company published a story that intrigued me just as it should intrigue anyone who has navigated the day-to-day rants and mutterings of co-workers on the job.

The title said it all: Do You Have a F*cking Problem With Swearing at Work?

The article was filled with a boatload of statistics about how much or how little people swear on the job. Here’s my favorite insight:

“Women are more likely to report dropping f-bombs at the office, with 60 percent admitting to swearing at work, compared with 55 percent of men. Men who do use profanity around the office, however, tend to do so at a higher frequency than their female colleagues.”

This is a sobering reminder that anyone who still thinks of women as the gentler sex has another f***ing thing coming.

When executives swear on the job

I bring this up because of all the chatter around the new, and now former, White House Communications Director, Anthony Scaramucci, over the abrupt language he has no problem using on the job.

But first, I digress for an important note:

Dear Gentle Reader: I am not writing about or taking sides on anything political in this article. It has nothing to do with the daily jousts, rumbles, or verbal spewage coming out of Washington, or anywhere else in Red State-Blue State America, and despite my residing in the People’s Republic of California,  please don’t worry that you will be compelled to attack or defend any partisan chunder here. My focus will be ENTIRELY on the workplace implications of someone who seems to have a gutter for a mouth, and for my purposes here, it matters not if the person works for POTUS or Uber or Tim Sackett. #endofdigression

Last week, Mr. Scaramucci, in his now former role as chief spokesperson for the White House, did a phone interview that is noteworthy for a lot of reasons, but largely because of the remarkable language he utilized while dissing some of his co-workers, aka, others he had issues with on the White House staff.

Here’s how America’s newspaper of record, The New York Times, reported it:

“In a vulgarity-laced telephone call with a New Yorker writer reported on the magazine’s website on Thursday evening, Mr. Scaramucci railed against (White House Chief of Staff Reince) Priebus and Stephen K. Bannon, the president’s chief strategist, both of whom opposed his hiring last week. He even vowed to get the chief of staff fired.  …

Mr. Scaramucci … made clear in his conversation with The New Yorker’s Ryan Lizza that he is trying to push Mr. Priebus out. “Reince is a fucking paranoid schizophrenic, a paranoiac,” he said. Mr. Scaramucci complained that Mr. Priebus had prevented him from getting a job in the White House until now, saying he “blocked Scaramucci for six months.”

Would YOU keep your job if you talked this way?

This is surprising language for a director-level executive no matter where they work, and it raises an important question: how much vulgarity is acceptable or allowable in today’s modern workplace? Would you keep your job if you talked about your fellow employees like that in public?

Well, Mr. Scaramucci didn’t keep his — he was only employed for about 10 days — and it shows that there are limits to how coarse and vulgar one can be on the job.

And although foul language helped deep six Scaramucci, experts agree that there IS some upside to cursing. In fact, the Fast Company article pointed to research that shows that “swearing at work reduces stress and boosts team spirit.”

The Harvard Business Review has made this same point as well, writing in a 2010 article titled Should Leaders Ever Swear? that “curse words, long considered a vice, can actually be used constructively.”

“It’s a phenomenon that’s the subject of a 2007 study published in the Leadership and Organizational Development Journal by Yehuda Baruch and Stuart Jenkins of the University of East Anglia in Norwich, England. They surveyed existing literature on why, when and how people swear in professional settings and conducted focus groups to better understand the practice.  …

Baruch and Jenkins group workplace profanity into two types: “social swearing,” generally used in casual conversation, and “annoyance swearing,” the “Oh s**t” variety that’s especially common in high-stress environments like trading floors. They see value in both types of usage. Social swearing “can serve to manifest and signal solidarity,” they write, while annoyance swearing “provides a ‘relief mechanism’ for the release of stress and tension.”

Making a point and motivating people

The research clearly shows there is SOME upside to swearing at work, but how much is too much? Probably the best explanation comes from Daniel McGinn, the author of the HBR article. He notes that:

“As a reporter … I’ve encountered corner-office types who casually swear during off-the-record asides in interviews. While they may be using this language simply out of habit, I’ve always considered it an attempt to bond — a naughty, I-shouldn’t-be-saying-this-but-I-can-trust-you act that sources sometimes use to ingratiate themselves with reporters. I’ve never known what to make of the phenomenon of the swearing CEO — it’s an aspect of leadership I’m still trying to figure out.”

Here’s my take: Sometimes, executives swear to make a point and to motivate people. When a top manager who never curses abruptly loses their temper and drops a few f-bombs, it tends to startle people and wake them up. Usually, that was their goal all along.

I don’t really have a problem with that because it’s “profanity as a management tool.” Sometimes as a manager, you do whatever it takes, even if it means swearing like George Patton.

What I DO have a problem with is when a manager curses to reprimand or punish someone else, especially when they go to extremes to do it.

I’ve told the story many times of the newspaper publisher I once worked for who would sometimes come into my office in a rage. She would be swearing and shouting, and she would end up balling up that day’s newspaper and throwing it at me before stomping out.

Needless to say, her behavior didn’t encourage me, her top Editor, to do better work.

It’s about getting the best out of people

But God bless her, she would always manage to come back to my office within an hour after her outburst, contrite, and apologize for how she acted. As much as I hated her behavior, I loved that she was always a big enough person — and a smart enough manager — to realize the impact her behavior had on me. She readjusted her style and did what she could to make amends.

The fact that the HR Director usually prodded her to make the apology was a factor too, but it didn’t make it any less powerful when she stepped up and rightly told me she was wrong.

Swearing is part of life, and that makes it part of how people act, both in the workplace as well as their personal life. Sometimes, there’s good reason for it, and if done the right way, it can motivate and focus people on what needs to be done in a way that nothing else can.

The problem is when it goes too far, when it is gratuitous, in excess, abusive, or about settling scores more than anything else.

That’s what was wrong with Anthony Scaramucci’s outburst. He went overboard, was way too personal, and became incredibly abusive. Plus, he embarrassed anyone who thinks a person with the title and authority he had should be held to a higher standard.

Scaramucci paid the price for his out-of-control gutter mouth with the loss of his job, and really, is anyone surprised?

Yes, I have a f***ing problem with people who swear at work — especially when they do it the way Anthony Scaramucci did. Somehow, I doubt that he’ll learn anything from this, but with an arrogant gutter mouth, that’s usually the way it goes.