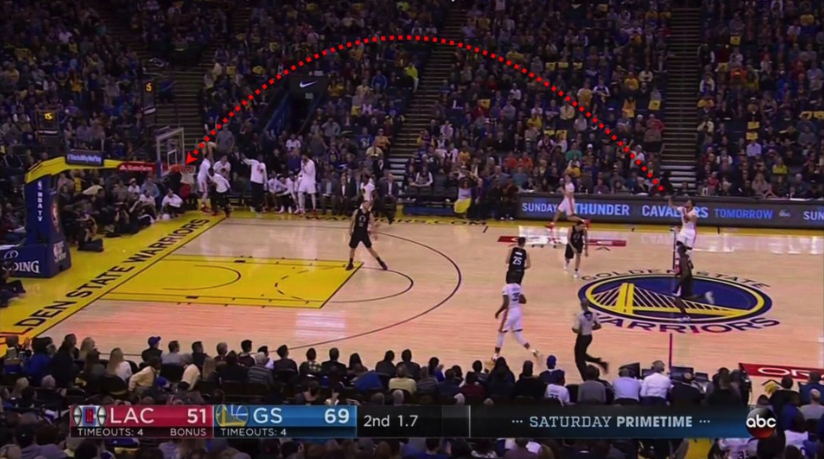 The decade is the mid-’90s.  A young Fistful of Talent writer, which may or may not be me, has landed his first job out of college in Division 1 college athletics.  It’s early in his first couple of weeks and he hears this coming out of the office of a more tenured peer (which, for all practical purposes, was this person’s manager):

OK, I was that kid fresh out of college who heard that.  I was comfortable enough in my second or third week to know that was basically an invitation to come down the hallway and see what the cursing was about.

So I went down the hallway.

Inside the more tenured assistant’s office, a TV was playing the tape of a game from the previous season (I was on staff at a Division 1 basketball program).  The assistant rewound the tape and offered up the following:

On the video was the team’s best player, loading up a shot from half court at the end of a half.  He had a clean look (but in a herky-jerky kind of way), took an extra dribble before he shot it, and the buzzer went off before the ball left his hands.  He missed, but the closest official waved off the attempt as the buzzer sounded and he was in mid-shot.

The seemingly meaningless half-court heave didn’t count as an official attempt.  And one of my future mentors was pissed.

What I later found out is that the player in question was legendary for knowing his stats in-game.  And he had a history of avoiding shots that would reduce his shooting percentage because, as one of the top shooters in college basketball, he was going to be measured on that related to whether he got the opportunity to play professional.

One of his KPIs was his 3 pt shooting percentage – and he didn’t want to harm that percentage vs a shot that he would hit 1 of 30 on.  So the extra dribble did the trick.

I was reminded of this early HR snippet in the life of KD by this post from Steve Boese (FOT alum) last week – The Downside Of Performance Transparency.  In the post, SFB (my nickname for him) outlines what public mortality rates by surgeons have meant in the UK – namely that 1 in 3 cardiac surgeons have refused to operate on a patient because it might hurt their numbers.

Let that soak in a bit.

The downside of really driving on metrics and KPIs is that failure can become something to be avoided.  Here’s a working list of where a metric/KPI can cause people to pass on work that’s meaningful and needed for a team/society:

1–Homicide Detectives – All you have to do is watch your favorite crime show and see the jockeying that goes on to avoid the unsolvable crime that will hurt the detective’s clearance rate.

3–Tech Support/Call Centers – Call time a metric for you?  Watch reps disconnect calls at a certain point to make sure their call time doesn’t creep up.  Of course, solving that complex problem for a customer is one of the most important things that can happen for the business, but c’mon – that’s going to hurt the stats.

5–Star Athletes – Need another example in addition to the early career example I shared above?  Dig into the life of Russell Westbrook, whose teammates routinely box out on Free Throws without collecting the rebound from a missed shot so Westbrook can come in from behind them and grab the rebound to contribute to his goal of averaging a triple-double (double figures in points, rebounds, and assists in basketball).

All these activities are the opposite of what’s intended when you measure people by KPIs, right? To keep KPIs and metrics from becoming funky, try and implement the following things:

A–Make numbers segmented and contextual.  If you want heart surgeons to operate on really sick patients, break out the numbers beyond overall mortality rates and show %’s across cases with low-win probability.

B–Make sure there’s a yin to the yang.  Call time is balanced by calls cleared.  Raw sales are balanced by customer satisfaction.  You have to measure the counter metric that balances the one that can get overweighted in the employee’s mind to keep bad behaviors in check.  You also have to make the yin stat nearly as important as the yang stat.

C–Tell stories culturally to reward risk-taking and team behavior at the expense of KPIs.  If all you do is drive towards metrics and KPIs and you never reward smart behaviors that are team-focused outside of those measurements, you deserve what you get.  Smart managers tell stories about cool risk-taking and unselfishness to balance out the need to hit metrics.

We all want the numbers.  In a data-driven world, we’ve never been in a better position to measure people through numbers and KPIs.

Make sure your team isn’t passing on valuable work because your company got laser focused on metrics and KPIs.