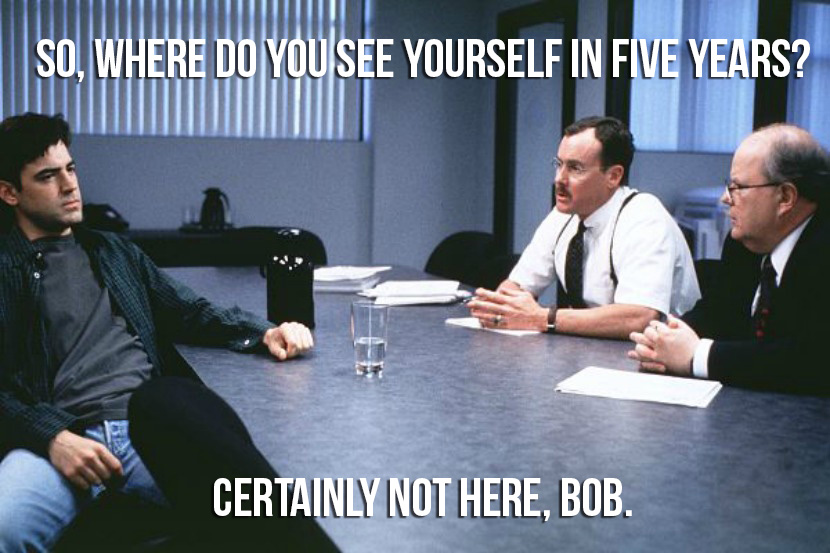 I’ve got a normal, everyday dilemma for you. You go into an interview for a job you really want. You’ve got a great career going, but this job is really next-level stuff, with a great brand. You have big career goal aspirations, so this won’t be your last stop. You know it’s coming, that question, but if you answer it honestly, it’s probably going to cost you the job:

Well, let me think about it. If I don’t say “Here, making ‘our’ operation the best ever!” then I’m probably shooting myself in the foot. We all know what the hiring manager, HR, and TA wants to hear. It’s what we think we all want to hear. “Well, of course, I see myself continuing to develop right alongside your great leadership as we work together to make the organization, and our department, the most successful ever!” Ugh, vomit.

The reality is that in five years, I have no freaking idea where I’ll be, but if I work the plan in my head, in five years I won’t be working in this mid-management job, for you, and maybe not even for this company! So, in five years I better have done a great job fixing everything that needs fixing and have trained my replacement, because I’m looking at VP, CPO, CHRO, and that probably won’t happen here, as you’ll be my boss and you’re like 13 minutes older than me.

How do you think that would play out in the interview!?!?

You can’t be honest and succeed when asked this type of question in an interview! It’s an awful question to begin with. I always want to turn it around and ask the hiring manager this question. 9 out of 10 would fumble around and not be able to answer. The one that can is probably the one manager you would actually want to work for in that organization!

It’s really unfair because what you’re really asking the candidate to do is just flat out lie to your face! “Hey, let’s get this relationship started the right way! I’m going to ask you a question that will force you to lie to me, then I’ll act totally normal at the lie, and we’ll make you an offer!”

Here’s what I would replace this with as a manager if I really wanted to see if the person was forward thinking:

“You have five years in this position to get everything done that needs to be done, then you’re off to your next position. What are you going to do in those five years? And, how do you do all of this, and prepare yourself for the next role? (Bonus question: what do you think that next role will be?)”

We ask the ‘five-year’ question because we are testing loyalty. We want the person to look us dead in the eyes and say, “Yes, I’m going to be HERE in five years!” We do this knowing our average tenure is like 3.7 years, but who cares, let’s go right in for the hard close on five!

I don’t care about longevity. I care about performance and commitment to the role of what needs to get done. If I hire someone who comes in and makes us great, I should be willing to help them reach the next level, even if that level is out of my organization. If I do that, I’ll probably get way more than five years!

(Hat tip to Nicole Holland for this idea!)