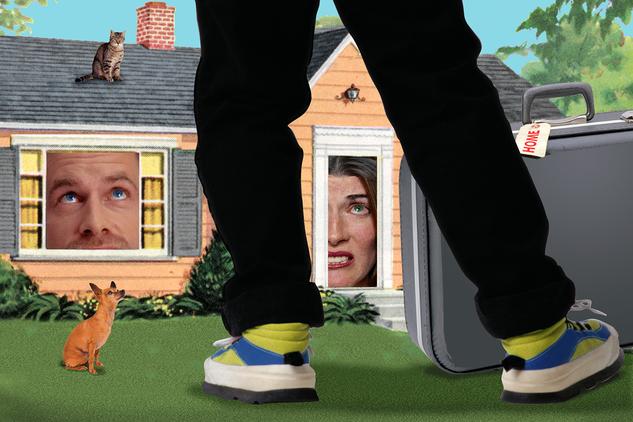 Have you heard the saying, “You can’t go home again.”

The saying actually comes from a 1940s Thomas Wolfe novel, “You Can’t Go Home Again,” in which the author writes a book about his own hometown and the residents are so mad about how they are depicted that he gets death threats.

In modern terms, it’s usually used to describe kids who have gone off to college or their first job, then they have to move home and find that transition to be really difficult. You leave home and have unlimited freedom, then all of sudden you’re back living with mom and dad and it’s miserable!

Based on the above example, if I asked you how much would it take you to move home and live with your parents, I’m sure many of us would not be able to put a price on that request! Basically, there is not enough money in the world to get me to move home! I’d sleep on a park bench before I would move home!

Okay, my back would never take a park bench, but honestly, I would only last a couple of days in my Mom’s guest room with a private bath, cable tv, and a king-sized bed!

What I’m talking about are boomerangs! Those people who moved away from their hometown for a job, but now a hometown employer wants them to come back!

A number of small Midwest towns are now offering to pay residents who graduated high school from their town a move-back bonus if they move back for an accepted job with a local employer. Port Huron, MI is offering $15,000 to people who were originally from the area if they come back to work with one of their employers in the county.

Port Huron has lost 15% of its population since 2000. It has growing employers who can’t grow without workers.

Of course! These “Come Home” scholarships to people who are 1. Originally from the county, and 2. Have graduated with a STEM degree in the past ten years. If you’ve done this, and you move back to the area, you get an additional $15K, plus whatever the employer wants to pay. The local economic foundation (most likely paid for by grants from local businesses and government funding) is paying for the scholarships.

Small Michigan cities aren’t the only ones, you will find similar programs across the Midwest in Iowa, Indiana, Ohio, etc. All of this makes sense with national unemployment at 3.8% and technology-related unemployment far lower. Companies are begging for help.

So, that’s my question:

How much would it take to get you to move back to your hometown?

You graduated college. Took the big money offer to go out to Silicon Valley. You pay $3500 per month in rent for a 500 square foot apartment you share with 2 other people. Now, Local Co. Mfg. Inc. is calling and offering you a job.

I really want to know what figure gets you to reverse course and come home? Is it $15K? What about $50K? What if I gave you $100K, but you had to promise to stay ten years? (but it would be released if you lost your job do the company leaving, etc.)

Does any amount of money really make a difference?

I don’t think any of these programs make a difference. I think it’s a waste of time and money to even try. I believe if a someone wants to come home, thousands of dollars won’t make a difference, especially when you’re talking about STEM career folks who are already making really good money.

Where this money should go is for scholarships and internship programs for kids who have shown an interest to want to work local, go to school locally, and believe they want to return and work local after graduation. What we know is most people will accept a job from the place they had an internship at, if it was a decent place.

I know. I know. You need more than entry-level hires! I get it but don’t sleep on the long-term needs, you need to fill that pipeline as well. For experienced local people, keep building that pipeline. The first step is to know who they are and connect with their parents and relatives. Find out the motivations and desires. Catch them when they come home for the holidays and summer vacations.

Market at hotels and wedding spaces where these kids return to be in each other’s weddings. Think like a late 20’s and 30’s something! What would it take to get them interested in coming home? Sometimes, it’s just showing interest and letting them know they’re wanted!