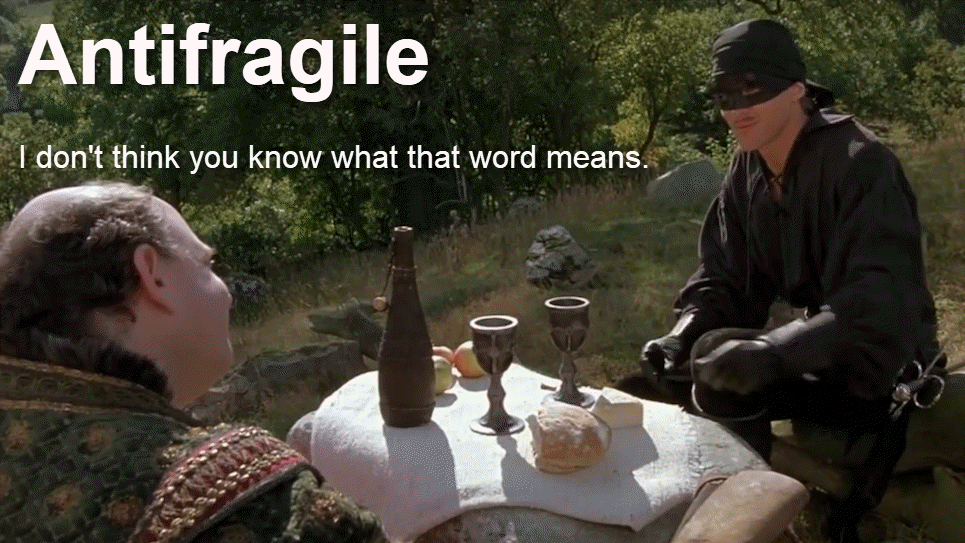 I’ve been fascinated with the idea of “antifragile” ever since I read about it in Nicholas Taleb’s book by the same name.

His book is about how systems react to stress, attack, or change. Fragile systems are easily damaged when exposed to negative change. They operate best when things just stay as they are. A robust system is one that can resist great stress for a longer period of time, but will still eventually fail…often spectacularly. Both fragile and robust systems end up in the same place when faced with an “attack,” one just faster than the other.

Think of it this way. The banking system is very fragile. We witnessed the fragility of it with the sub-prime mortgage boom and bust back in 2008. Redundancy in computer systems can create a robust system, at least until the core circumstances change or the number of failures exceeds the redundant elements. Robust systems get neither better or worse with most failures.

But according to Taleb, antifragile is a very different and very interesting system.

Antifragile systems benefit from stress – they get better from change, and after failures.

As the world around it changes, it adapts, reacts, and gets better. As it fails it gets stronger – it learns and creates ways to not fail that way again. Taleb references the scientific principle of “hormesis”. Believe or not, you were exposed to that concept in the movie “The Princess Bride” when Vizzini and the Man in Black had their infamous battle of wits and had to choose which cup had the iocane poison in it. The Man in Black states after Vizzini dies, “They were both poisoned. I spent the last few years building up an immunity to iocane powder.” Hormesis is the process by which taking limited doses of a harmful substance makes organisms stronger, healthier, and prepared for a bigger dose the next time around. It is antifragility in action.

Change is Faster and More Volatile

It doesn’t take a genius to figure out that business, and everything it rests on, is getting more volatile and changing at a faster rate than ever before. Planning for 5 years down the road almost seems quaint. (Yet sooo many companies still think they can see that far in front of their headlights.) The reality is you can’t. No one can anymore. But we plan and create systems that RELY on a 5-year runway of constant and consistent predictability even when we know it is Sisyphean. There is something so comforting about those 200-page PowerPoint decks with charts, graphs, and pivot tables, that we can’t seem to shrug them off. Strategic planning is the business version of chasing the white dragon. You will never get back to the day when what you planned for in 1995 was still relevant in 2000.

How can HR take advantage of this?

But I do know that if they don’t, they won’t be able to fulfill their mission in the future. What I read and see in the HR ecosystem is pretty much focused on creating systems built for the long-term – buying and adopting processes and technology that require time to be valuable and validated. I don’t hear much talk about how to create a system for managing people, culture, and brand on a short-term basis with built-in gates for pivots and changes:

That is what I think HR antifragile is all about. I probably don’t have the correct answer, but I have the question you should be asking, “How can HR become antifragile?”

How can HR be stronger during times of uncertainty and change?