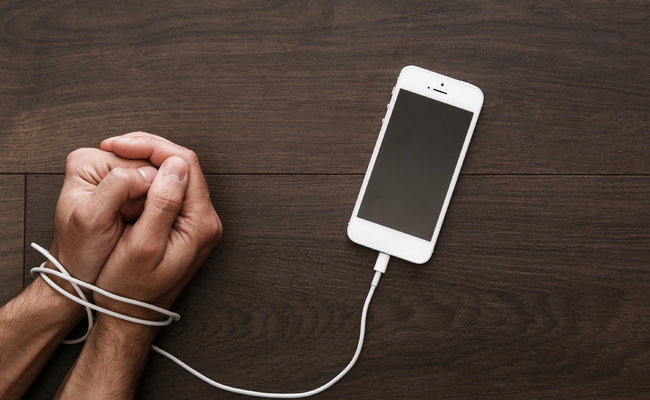 Your workers are in denial about their smartphone addiction.

OK, it’s not just YOUR workers who are in denial about this, but everyone’s workers, everywhere.

This is what I take from a recent survey from KDM Engineering titled Smartphone Etiquette that hit my email last week, and as I read the findings, all I kept thinking was, “Yep, this doesn’t surprise me at all.”

It’s that last finding that shouts “smartphone addiction,” because I can’t imagine anyone doing anything 2,600 times a day without it falling under the textbook definition of addiction. Here’s how Urban Dictionary defines addiction:

A conscious (and unconscious) action characterized by repetition and obsession. It is possible to become addicted to basically anything, sometimes the tendency may be rewarding but often it is problematic and self-destructive.”

Half of employees use their phone in meetings

But, it’s in the survey’s workplace findings that you really get the full sense of how smartphones are probably impacting your workplace. The survey found that:

When employees know it’s inappropriate to have their smartphones out in a meeting, but still do it, and then check them as well despite knowing it’s bad form, well, that’s when you know people are in denial about how big a problem smartphone addiction actually is.

The staffing firm OfficeTeam conducted a survey a couple of years ago, and it found that employees spend about 56 minutes per day using their cell phones for personal business while at work.

That sounds like a lot, and what made it worse was that the managers surveyed assumed their employees were looking at social media when many employees said they were actually reading and responding to personal emails. In addition, 58 percent of workers reported using their cell phones to visit websites that had been blocked or banned by their employer.

Here’s the not-so-little secret about smartphones: People can’t use one and do anything else well, and anyone who thinks they can is simply fooling themselves.

I can’t tell you how many times I’ve had somebody at the gym nearly knock me over me as they walked by and read something on their phone. Or how they nearly got run over in the parking lot doodling on the phone, oblivious to cars backing out or trying to navigate around them.

And how about people driving and talking without a hands-free device? Whenever I see someone driving erratically — going dangerously slow or weaving across their lane (and sometimes veering into someone else’s lane) — I think they’re either drunk or on their phone. Most of the time, they’re totally engrossed in the phone and have no idea they’ve turned into a road hazard.

Such is the state of life and technology in 21st Century America.

The notion you can be on your smartphone and do anything else — even just walking — is a crock.

Given that, what does it tell you when your workers are doodling with their phones during an office meeting?

What it tells me is that employees addicted to their smartphones aren’t giving you the performance you need from them when they try to work AND fiddle with their phone. Something has to give, and when someone is engrossed with their phone what usually gives is whatever else they think they’re doing at the time.

ComputerWorld columnist Mike Elgan focused on this topic last year in an article titled Smartphones Are Driving Us to Distraction. He wrote, in part:

“The rate at which smartphones and their apps grow more addictive and distracting keeps growing. Our innate ability to resist those addictions and distractions doesn’t really grow. As former Google product manager Tristan Harris says, technology is “better at hijacking your instincts than you are at controlling them.”

All of this raises the question: Is there an answer to smartphone addiction? How many surveys do we need to tell us it’s a huge problem for our workers?

“I would love to see new norms or policies emerge in enterprises where it becomes unacceptable to bring smartphones into meetings. Business meetings could offer a moment of attention in our otherwise distracted work day. …

I’m predicting that the newest trend will be widespread smartphone fasting — going without a smartphone for varying lengths of time. One way is all the way: getting rid of your smartphone and not buying a new one. Instead, buy a great camera and cheap feature phone and carry those.

Another option is to schedule data connectivity: carry the phone, but allow yourself just a few hours a day of being connected.

Yet another approach, which is growing in popularity already, is to delete all your social networking accounts and thereby remove one source of compulsion with the smartphone.

Enterprises will (and should) organize voluntary smartphone fasts for the benefit of employees and company productivity, as well as provide training and coaching for addicts and prevention programs for the as-yet unafflicted.”

Better fix this before it’s too late

These steps may sound pretty radical, but as the Smartphone Etiquette survey shows, your employees may KNOW what is inappropriate smartphone behavior at work, but a great many of them can’t help themselves when it comes to their phones.

Mike Elgan’s fixes may not work for your workplace, but the message is clear: You better get on top of this smartphone addiction problem before it gets worse.

If you don’t have a workplace smartphone policy, well, you’re probably just asking for smartphone addiction to become a bigger problem.

Better fix it now before it’s too late. Your culture and productivity will thank you.