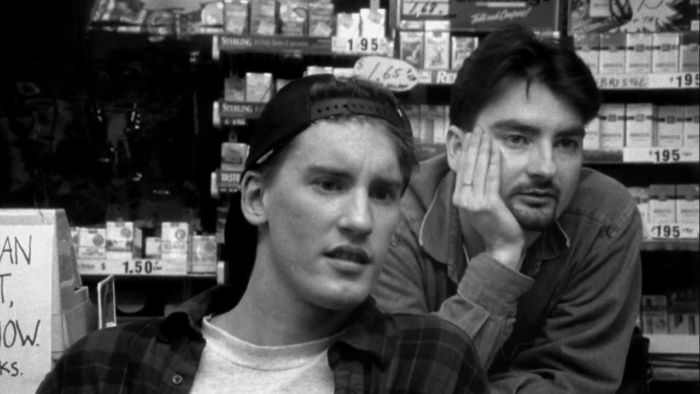 We’ve said it in this space before. Follow along from home or the office:

–Great performers/talent see the world differently than others…

–Exceeds performance should be reserved for the game changers…

–Innovators do unexpected things others think are crazy…

I know, you’ve heard it before. If you’re a top performer, it doesn’t matter what you do for a living – accountant, fireman, sales professional, etc. If you’re really a player, odds are you are figuring out different ways to do things in addition to simply doing your job at a high level.

Thinking about “what’s next” is a common DNA characteristic of the great ones, as is creating new stuff from scratch.

Turns out, you can go to a run downtown in America, and even the best slackers/dropouts are actively thinking about new things to do, new ways to create opportunity.

Enter the Gen X film classic “Clerks”. If you’re not in the know, here’s a description of Clerks:

Clerks is a 1994 American independent comedy film written, directed, and co-produced by Kevin Smith. Starring Brian O’Halloran as Dante Hicks and Jeff Anderson as Randal Graves, it presents a day in the lives of two store clerks and their acquaintances. Shot entirely in black-and-white, Clerks is the first of Smith’s View Askewniverse films, and introduces several recurring characters, notably Jay and Silent Bob, the latter played by Smith himself. The structure of the movie contains nine scene breaks, signifying the nine rings of hell as in Dante Alighieri‘s Divine Comedy, from which the main character, Dante, gets his name.

I got referred to “Making of Clerks” over the weekend and lost an hour of my life watching how Clerks got made. See the video below (email subscribers click through if you don’t see the video) and I’ll give you some facts about how Kevin Smith, the writer, director, and producer, got the inspiration and got the film made.

Ready for some facts about Clerks? Ready to see an example of true innovation from Gen X slackerville? Here you go.

Clerks. If you’re like me, you loved the movie as a Gen X kid trying to get a career started in the 1990s and early 2000s. The real strength of the movie was its replay on movie channels, and yes – via rentals at the now extinct video store.

Watching “The Making of Clerks,” I was struck by how Kevin Smith created something valuable out of nothing and went deep about what he knew best.

I was also struck by how the movie would have died – if not for one connected critic who decided to be one of 5 people to watch the film at the end of a film festival on Sunday night.

Sometimes all it takes is one person – to recognize genius and launch a career.