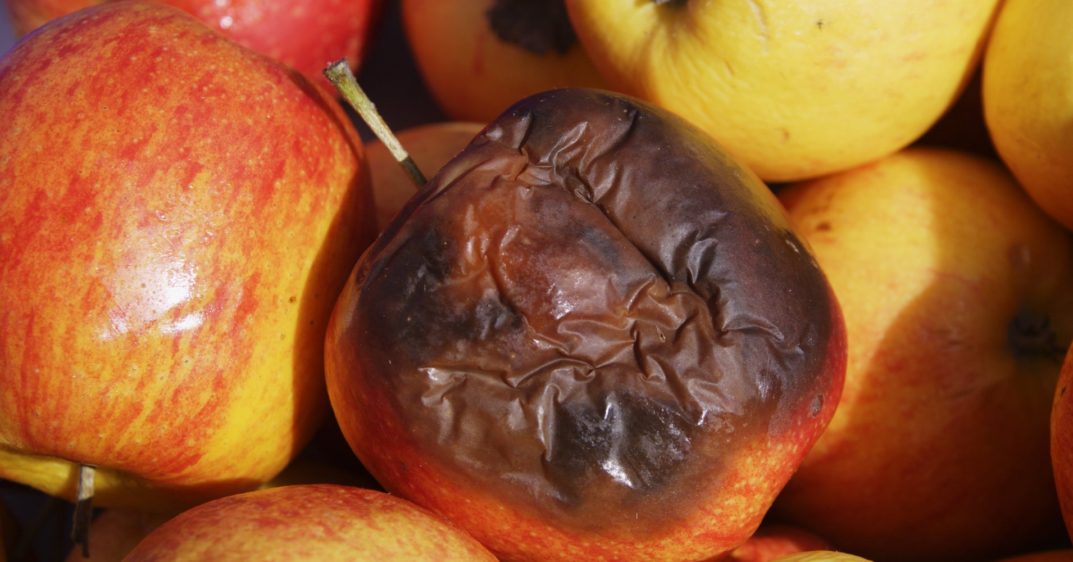 Everyone’s heard the phrase “a bad apple spoils the bunch,” but in my work experience, this hasn’t been true.

When you know you have a bad apple, because it’s obvious and visible, you get rid of it.

You throw it out.

It’s much harder to recognize a semi-bad apple from a good one, and therefore much harder to get rid of it before it spoils the rest. You think “Looks good to me,” and the next thing you know the fruit flies are gathering and you’re trying to figure out why.

Let’s put this analogy into a people and HR context.

You’ve got a bad apple. A poor performer. Someone with a bad attitude and a flair for the unruly that delivers well below expectations.

What’s a good leader to do?

That’s right–you give ‘em the hook. Get them out of here. Remove them from the team, ASAP.

Sometimes this entails “due process.” But because this bad apple is visibly bad, documenting the situation to the degree necessary to get rid of them is a pretty easy process.

You’ve already given them verbal warnings. The next step is the PIP (Performance Improvement Plan). C’mon, we all know better, they aren’t going to improve. We are putting them on a PIP to satisfy lawyers and avoid a lawsuit, not because we think they’ll actually improve. They are already rotten, to the core–no saving this one for apple sauce. The PIP is just the first step required to get rid of them, plain and simple.

Then, a final warning.  You’re almost home, just one more misstep and even your any-risk-is-too-much-risk employment lawyer will authorize their termination.

And then the day arrives–finally. You sit down for a swift and decisive conversation, a final check, and a few generic, half-hearted well wishes for the future. And just in time to not spoil your whole bunch. You happily report that they are no longer part of the team and you feel confident that you’ve set a good example. Time to move on, and up.

Are they really so bad that I need to throw them out?  I’m a pretty good manager, maybe I can salvage them. And hiring someone new is time-consuming and a crap shoot. Besides, that semi-bad apple does have that rich, red, ripe side. They kicked some major butt on that one project a few months ago. They landed that big account last quarter.

Then we make that fatal decision and decide to do, that’s right, nothing.

And that’s the problem–we compromise, and in doing so send a really bad message to our teams. To our bunch of good apples.

Right now the company I work for is in the throws of our annual performance review process. Many companies do this with more frequency these days. So with the increased frequency of this process as a leader, you will have the opportunity to analyze and examine your bunch of apples.

How do you avoid the semi-bad apple issue?

Addressing the spoiling quickly and decisively will serve the team well and it will highlight your leadership chops, too. It will set the bar high for not tolerating spoiling, and having only ripe, sweet apples on the team.

That’s one of the most important qualities of being a talent leader and attracting more good apples. And who doesn’t want that?