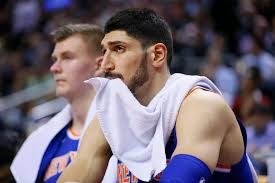 A quick prelude to my discussion today:

Enes Kantor, the former NY Knick center rode the bench almost all of this NBA season before being traded to the Portland Trailblazers, who had him play significant minutes during the playoffs. It’s a little hard to feel too sorry for him receiving $17 million in compensation to keep his seat warm until he was finally traded. However, it made me think about all the different scenarios of folks warming the bench at their organizations today, the reasons why, and the implications for HR.

This is a far cry from watching my daughter warm the bench a few years back for 3 games as a Junior on her high school volleyball team before cracking the starting lineup. I bet many of you have felt that anguish either personally or as a parent. The good news is it often works itself out (she started every game thereafter and went on to receive scholar-athlete recognition), but not always. It’s a bit of a taboo subject for athletes and in parallel for individuals in the workplace.

I see 7 reasons for warming the bench in sports and work alike, and I am sure you could offer up a couple more; however, it is food for thought for every HR and Talent executive to lament and get in front of. This, in addition to thinking about your own personal situation.

So today, I will draw an analogy between sports and business.

Here are my 7 reasons why most folks ride the bench and how you should deal with it:

The first 2 are fairly easy to get your hands around.

You’re new and must learn the ropes of your essential job functions. Or you’re that person who does the things necessary to fill in or help whenever necessary. Every team needs a few utility players too. In fact, in sports, they are becoming more important to success and more than likely, the versatility will help your organization get through some tough spots as well. Keep these individuals in the loop, interested, and let them know their time will come.

The third is a tough one–a star employee who has suffered an unplanned setback. In real life, it could be a personal loss of a family member, chronic illness, marital or family difficulties. You can’t see it coming, and when it happens, it is difficult for the individual and your organization. Both want to get through it as quickly as possible and get back on track. Empathy and understanding are the remedies here.

For former starters in the twilight, it’s a mixed bag. Athletes often play one year too long at the twilight of their career. Employees have difficulty realizing they are no longer on the “A” team. They struggle with the loss of recognition and visibility. Organizations need to help these folks either reinvent themselves or learn to accept roles where they can contribute to the overall success without the fanfare.

The 5th group on the list, great players but terrible fits, is the most puzzling and happens way too often. It happened to me a few years back too, so I can discuss this one from a distance and up close. You were the darling of your former organization, recruited away to be the hero of your new organization and you just don’t fit. Who’s to blame when this happens? Well, everyone involved. Due diligence on fit is often overlooked by the individual, and organizations need to understand that the attributes and actions that made you successful in your last role may play out differently. HR and Talent need some work in this area in many organizations. If you are dealing with this scenario, be honest and understand the best solution is admitting it’s a bad fit. Soft landing with a little cash is often the approach.

Next is the scenario where your team is loaded with stars at the same position. Think Jack Welsh’s senior team at GE a few years back. Sometimes this is license to move on to a new organization and organizations need to plan for this. McKinsey and Boston Consulting are famous for their alumni, so are the Big Four accounting firms. Remember, you can only have one master chef in the kitchen. You can only keep these folks on the bench for so long–other teams will come knocking, and these folks will often depart.

The last is a roll of the dice. Your boss sucks, but maybe you like your job and the organization. Toxic bosses are a big reason many folks leave their jobs. Yet, some have the fortitude to stick it out. This one is more personal, and only you can decide what is best for you. Consider if your boss is only mimicking the organization’s behaviors, or is an outlier. Also, think through if you can find common ground, or if it’s just a train wreck with little chance to fix. If you’re on the employer side, you need to address the bad management. This is about acknowledging and having the fortitude to have some tough conversations.

So, you work in HR and Talent and need to respond, support, or deal with these scenarios at different times, and sometimes with little notice. Remember to be aware and support the individuals in this variety of scenarios. Recognize sometimes folks do need to leave for their own best interests and for those who stay, help them transition to their new roles on the bench. Remember that you never know when their number might get called, so keep them motivated as best as you can.

And as far as Enes was concerned, the Knicks didn’t want him to get hurt so they could get maximum dollars or players back in a trade. I know it’s not listed as a reason–businesses don’t usually trade folks–so it’s an outlier, and I think it all is working out in the end.

Well I gotta go, they called my name, they need me in the game.